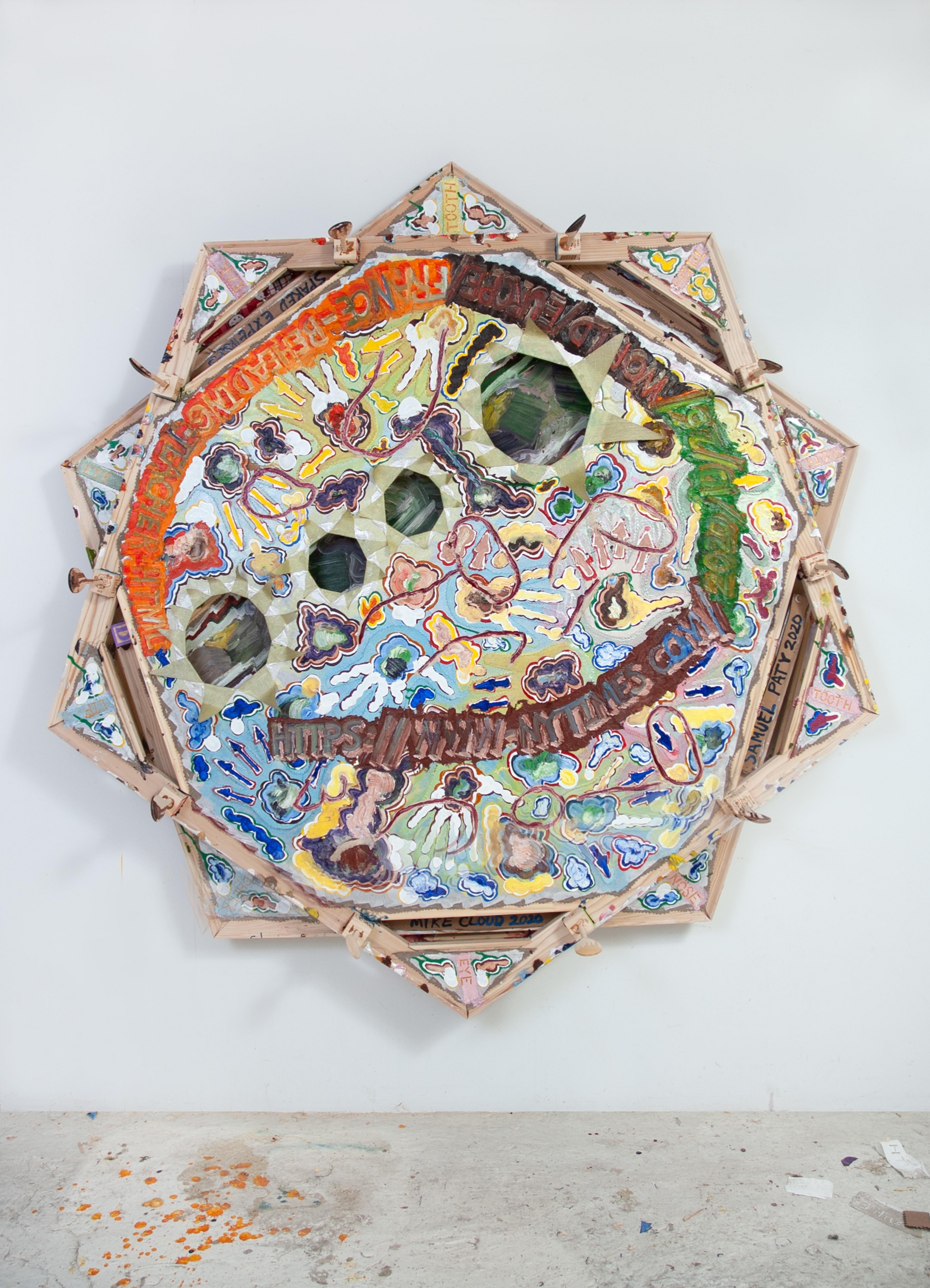 Mike Cloud was born in 1974 in Chicago, Illinois where he lives and works. He earned his M.F.A. from Yale University School of Art in 2010 and his B.F.A. from the University of Illinois-Chicago.

Cloud is known for his innovative use of stretcher bars as a means of creating his shaped canvases, as well as the use of belts, fabrics, paint, and other materials in bright colors.  His recent work, a series of abstract portraits of people who have died from hanging or beheading, addresses the one experience we all have in common regardless of race, gender, ethnicity, wealth, or nationality: impending death.

Cloud has been reviewed in the New York Times, Art in America, Art Review and featured in the publication Painting Abstraction by Bob Nickas, published by Phaidon Press. His awards include the inaugural Chiaro Award from the Headlands Center for the Arts, a residency at the Marie Sharpe-Walentas Studio Program, Brooklyn, NY, an artist Fellowship from the New York Foundation for the Arts, the Barry Schactman Prize in Painting from the Yale University School of Art as well as the Grace Holt Memorial Award in African American Issues from the University of Illinois, Chicago.

He is currently Assistant Professor at the School of the Art Institute of Chicago. His work is represented by the Thomas Erben Gallery in New York. 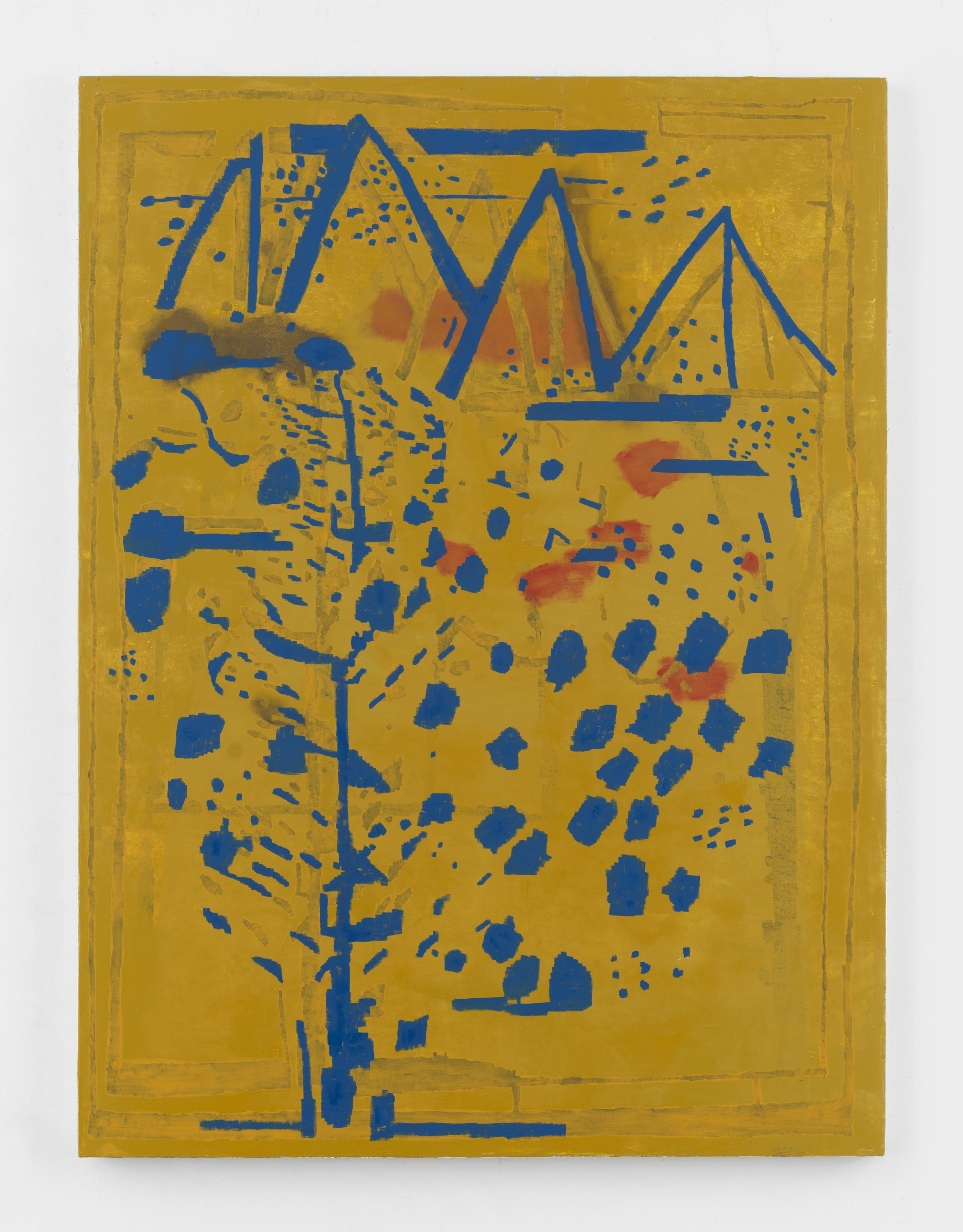 Hauser approaches paintings first by establishing an armature and then building up and out from her initial structure. These early forms diverge and challenge singular readings of painting, which feature diagram-like forms with flat, mostly unmodulated color generated through layering process that conjures screen-printing or crayon drawing.

Recent solo exhibitions have taken place at the Philipp Haverkampf Gallery in Berlin, Germany and at the Derek Eller Gallery in New York; she has also shown at The Journal Gallery, Regina Rex, NURTUREart and James Fuentes in NY.

Reviews of her work by Roberta Smith, Jerry Saltz, Holland Cotter, Stephen Maine, and Sharon Butler amoung others have appeared in the New York Times, Bomb Magazine, Artnews, Art in America, The New Yorker, The Brooklyn Rail, Two Coats of Paint.

She was awarded a residency at the Bovina Artist’s Residency, Bovina, NY in 2018 and at the Robert Blackburn Printmaking Workshop in 2014. In  2013 she received a Rema Hort Mann Foundation Grant. 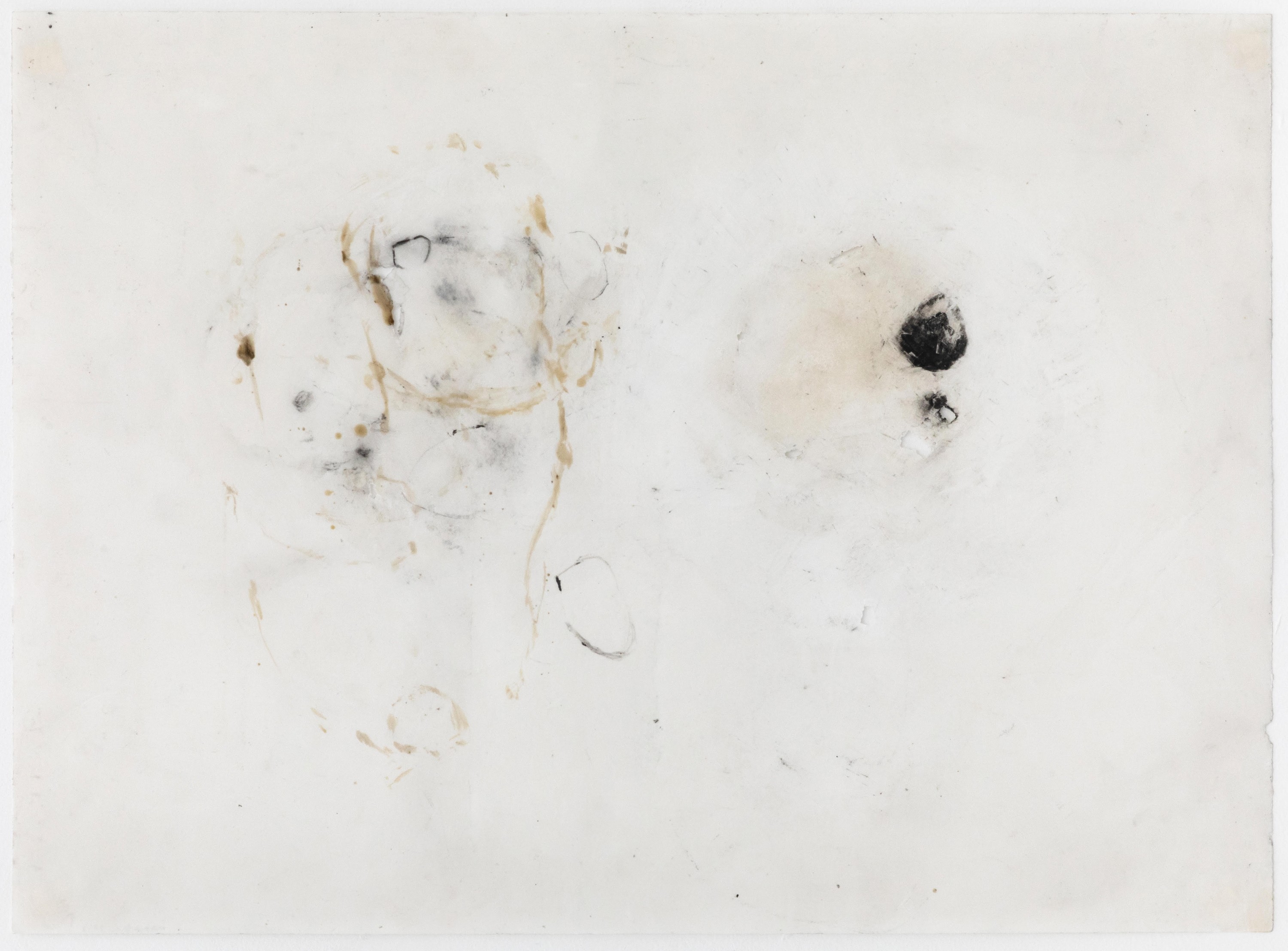 Linda Matalon was born in 1958 in Brooklyn, and has biographical roots in Germany and Cuba. She lives and works in Brooklyn, NY.

Engaged with material process and the gauging of body-space relations, Matalon employs a sculptural approach to her abstract wax and graphite works on paper in which she builds up and erases their surfaces. Executed on large sheets of paper saturated in wax that retain every mark or scuff, Matalon’s drawings record the process of their own making and evoke both Zen brush paintings and the calligraphic gestures of Cy Twombly.

Linda Matalon’s career began in the 1970s with a highly acclaimed group of wax and metal sculptures. Sharing concerns with Joseph Beuys’ “Social Sculpture”, her works define the relationship between subject and social environment on an abstract, corporeal level. In this regard, Matalon’s pieces appear as “subversive figures” that communicate what is unsaid, excluded corporeality, to the outside.

Nick Mauss was born in 1980 in New York where  he  lives and works. He received his Bachelor of Fine Arts from The Cooper Union for the Advancement of Science and Art, New York in 2003.

Working at the interstices of different media, Mauss makes drawings, paintings, sculpture and does performances.  Mauss’ drawing and painting on glazed ceramics provides him with a certain unpredictability; the firing process employed by the artist is ‘blind’, not allowing for clearly selected/predefined colours.  Drawing offers a uniting thread and viewers of Mauss’ work observe draughtsmanship at what often appears to be various stages of completeness. Figures made out in graphite are often visible but their entire form is often fragmented; they appear to be in the process becoming rather than fully finished.

He has had solo exhibitions at Kunsthalle, Basel in Switzerland in 2019, the Whitney Museum, New York and the Triennale di Milano and Torre Velasca, Milan in 2018 and at the Serralves Museum, Porto  in 2017 with an accompanying catalogue. In galleries at Independanza Studio, Rome; the desire for the possibility of new images at 303 Gallery, NY, Disorder at FRAC Champagne-Ardenne, Reims and Invitation a l'Etude, kim? in Riga, and Galerie Neu, Berlin.  His work was included in the 2012 Whitney Biennial; Greater New York in 2010, and in group exhibitions at institutions including The Museum of Modern Art, NY, The Walker Art Center, Minneapolis, Artists Space, NY,  Kunsthaus Bregenz, Kunsthalle Basel, Martin Gropius Bau, Berlin, Kunsthalle Zürich and the ICA, Philadelphia.

Mauss' work is in public collections including The Museum of Modern Art in NY, The Whitney Museum of American Art, The Walker Art Center in Minneapolis, the Hammer Museum in Los Angeles and FRAC Champagne-Ardenne in Reims. His writing has been published in Artforum, Mousse, MAP, Peep-Hole, and in books on Jochen Klein, Isa Genzken, and Lucy Mckenzie & Paulina Olowska.He was a guest-professor at the Hochschule für Bildende Künste, Hamburg from 2011-2012.

Levinthal is a still life and figurative painter who explores the complicated, nuanced matter of everyday life. Using the content of her refrigerator as inspiration, she creates still lifes from her leftovers that mix mystery with the mundane for an emotional charge. She maintains a diaristic blog and details her thoughts, influences and experiences alongside her work.

She is the recipient of multiple Elizabeth Greenshields Foundation Grants and completed a residency at Ballinglen Arts Foundation, North County Mayo, Republic of Ireland in 2017. 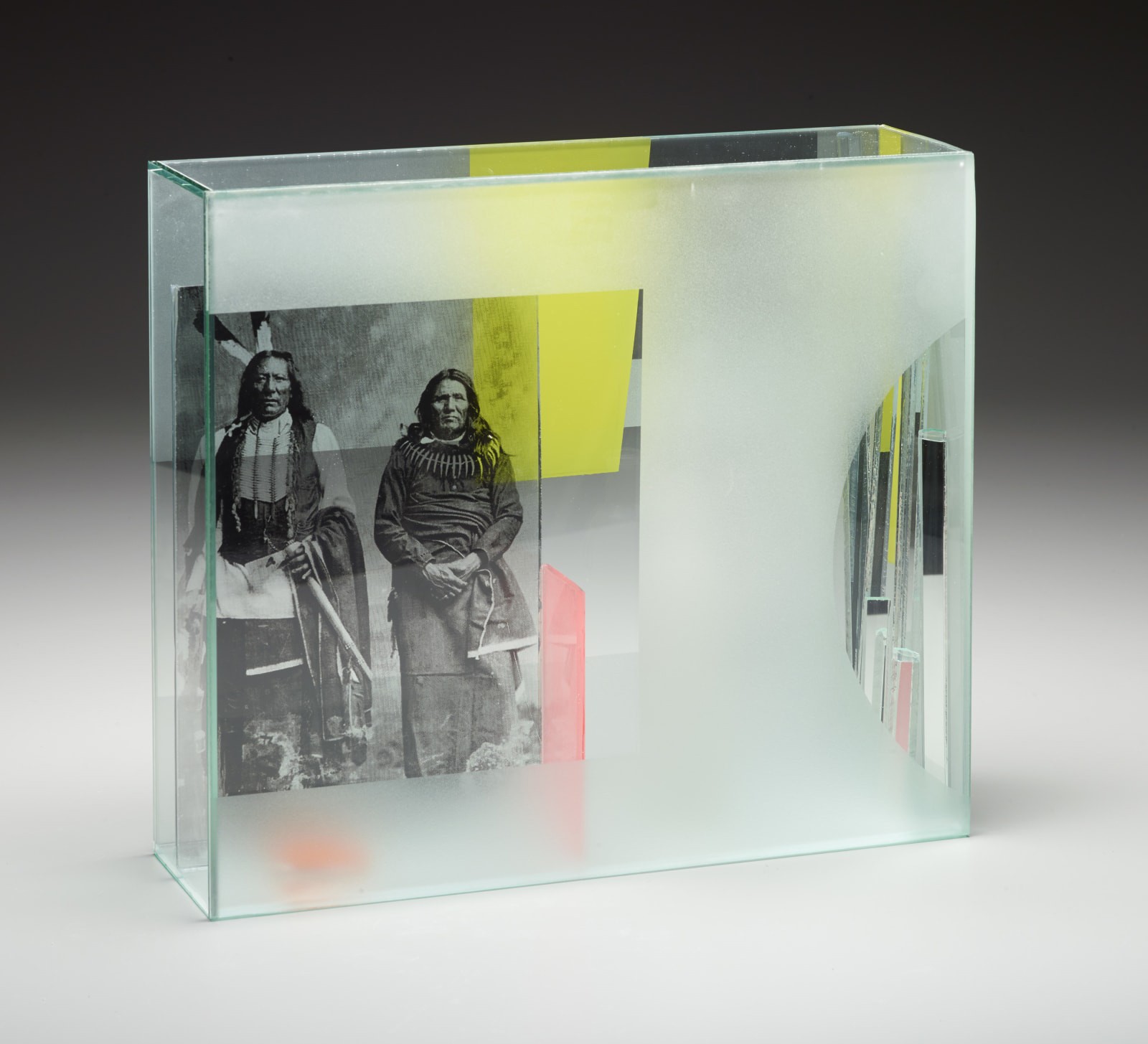 Therman Statom was born in Winter Haven, Florida in 1953, he lives and works in Omaha Nebraska.  Statom spent his adolescence in Washington, D.C ; he received his BFA from RISD in 1974 and his MFA from Pratt Institute of Art & Design in 1978.

A sculptor, glass artist, and painter, Statom is most notably a pioneer of the contemporary glass movement for his life-size glass ladders, chairs, tables, constructed box-like paintings, and small scale houses.  His sandblasted surfaces become a canvas for spontaneous vibrant colors and line, while simultaneously incorporating blown-glass elements and found objects.

Much of the latter half of Statom’s career has been focused on the importance of educational programming within the arts. He has taken a deep interested in employing workshops as a catalyst for social change and in affect, positively impacting a community.

His public artworks have been permanently installed at the Los Angeles Public Library, the Los Angeles International Airport, Tom Bradley Terminal, Corning, Inc., the Mayo Clinic, the San Jose Ice Center, Harrah’s Casino in Las Vegas, the Toledo Museum of Art, the Scottsdale Museum of Contemporary Art and the Jepson Center for the Arts in the Telfair Museum, Savannah as well as several hospitals across the country. Other museum installations include Lowe Museum of the University of Miami, Coral Gables, Florida; Chrysler Museum of Art in Norfolk, Virginia. Internationally he has shown his work in in Stockholm, Sweden; Paris, France; Hokkaido, Japan and Ensenada, Mexico.

Sadie Laska was born in Prince, West Virginia in 1974; she lives and works in Brooklyn, NY.  She received her BFA from West Virginia University in 1992 and her MFA Bard College in 2014.

"I keep fighting against the framework and the shape of the canvas and whether it should adhere to the structure of a stretched form, "she says. "Many of the pieces I make end up getting pulled apart again. I’ve accepted that as part of my process that everything might not come together until the final moment."

Laska might previously have been best known as half of the New York sound band I.U.D. and has numerous performances to her credit in her role as a performer. 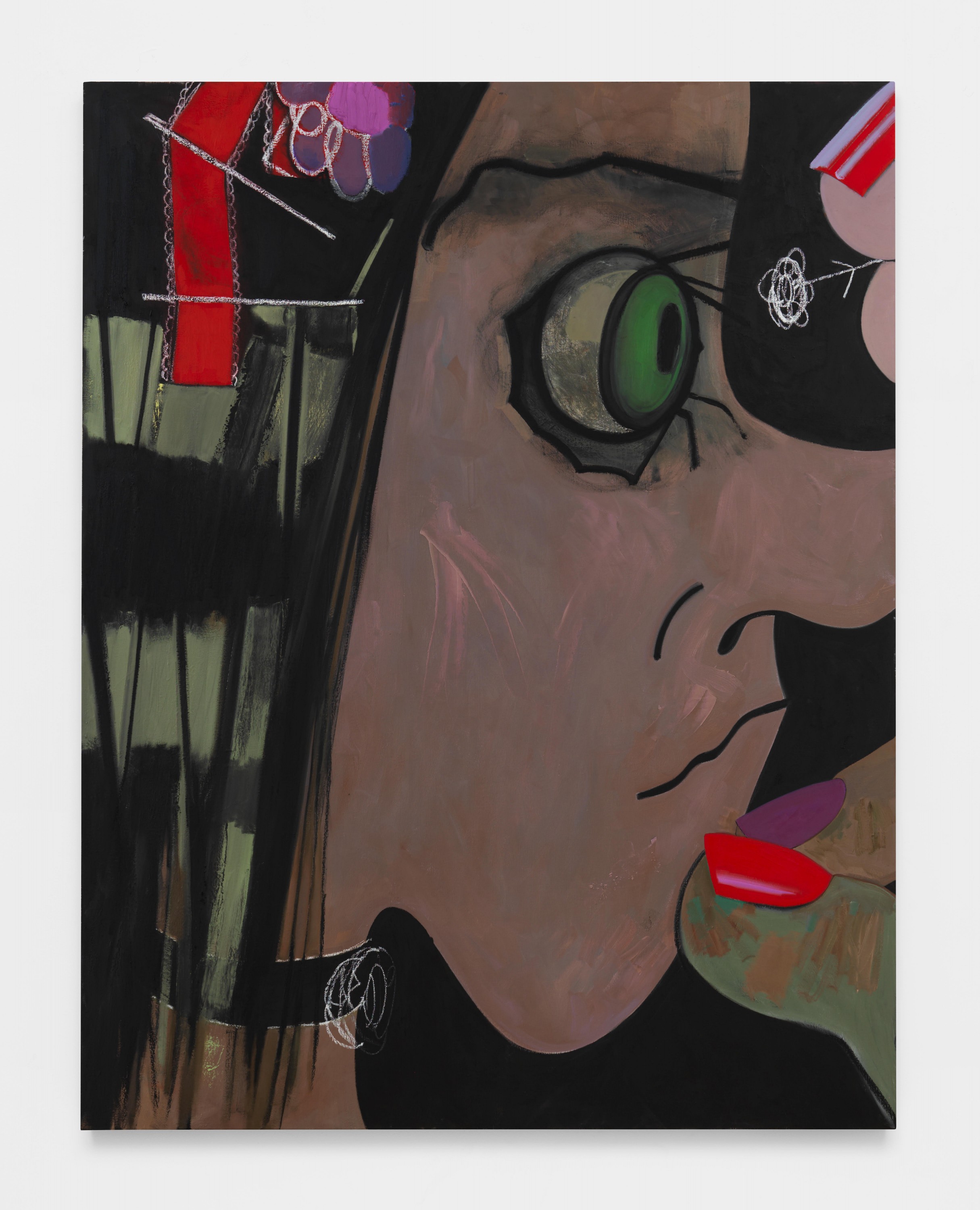 Ellen Berkenblit was born in 1958 born in Paterson, NJ, she lives and works in NY.  She received her BFA from Cooper Union in 1980.

Known for her colorful, gestural paintings of women and animals that riff off cartoons, Berkenblit often works large-scale in oil paint.  Her recent show in NY, Sistergarden, at A Kern Gallery featured a recurring motif in the form of a magical female protagonist in profile with long lashes, rosy cheeks, and wild hair.  Mouth open and seemingly screaming, Berkenblit gives space here to the contemporary women’s rage with humor and style.

Berkenblit had her first solo exhibition in 1984 at Semaphore East gallery in NY, and has shown regularly since, most recently at Anton Kern Gallery in New York, Susanne Vielmetter Los Angeles Projects, Michael Benevento in Los Angeles, TBA Gallery in Chicago, Suzanne Hilberry Gallery in Detroit, and Charim Klocker Gallery in Vienna, among others.  Her work has been in numerous group exhibitions in NY each year including White Columns, P.S.1. L.I. City, NY, ABC no Rio, Wooster Gardens, Martos Gallery, Luhring Augustine, Alexander and Bonin, B Gladstone, D Eller, D Nolan, & The New Museum.  More recent national and international showings include Centre Pompidou in Paris, the Museum of Contemporary Art in Chicago, The American Academy of Arts and Letters in NY, The National Museum of Women in the Arts in Washington, D.C., and The Drawing Center, the Whitney Museum and MOMA in NYC.