A passionate educator, thinker, innovator and maker, Jenna Frye ’05 (Rinehart School of Sculpture M.F.A.) is a champion of collaboration beyond the arts. Artists, she believes, bring to the table more than just visual communication expertise. “Having objectivity next to subjectivity is beautiful,” she explained. “And a lot can come from that if we learn to value what the other side sees.”

That sentiment is echoed by senior management at the Hopkins Extreme Materials Institute (HEMI) at Johns Hopkins University (JHU), who saw the potential for art and science to complement each other, and to help tackle one of their perennial challenges.

“We research how materials and structures react under extreme conditions, to develop science and technology that protect people, structures and the planet. In doing so, we generate huge data sets and tons of complex information that we often find difficult to visualize and explain to others,” Lori Graham-Brady, associate director of HEMI said. “We thought the designers at MICA, who are naturally inclined to convey complex information in very concise ways, would be able to help us with that.”

Against that background, coupled with a strong ethos of collaborating with other Baltimore institutions, HEMI approached MICA — and MICA, impressed with the former’s commitment to interdisciplinary research, recognized the opportunity. So, in 2015, the HEMI/MICA Extreme Arts Program (HMEAP) was born, with the aim of encouraging collaboration among artists and researchers — to examine data, interpret outcomes, and translate results from extreme events in new visual ways.

Jay Gould, an artist and faculty in the Photography Department at MICA, was the first artist-in-residence of the HMEAP. His work, which has won numerous national awards, integrates scientific topics into installation and constructed photographic projects, and he explained, “I’ve always been excited about the invisible world that creates our reality.  HMEAP was a perfect opportunity for me to further that interest and tell stories.”

Gould said he was invited into HEMI’s world with warmth and excitement, plus an incredible openness not typical of such labs. “HEMI did not have any preconceived idea of what I would do. They also offered me a lot of access, especially with my camera. That receptivity gave me free rein to explore ways to represent, visualize and interpret their research.”

At the end of his residency in spring 2017, he exhibited some 40 pieces of art work representing his collaboration with six HEMI labs, including videos and a 90-foot accordion book of 180 time-lapse images that captured 36 microseconds of magnesium cracking under high-speed impact.

The show’s audience was invited to admire the depth of extreme materials, to think about the challenges that labs like HEMI face, and to recognize how its work impacts all of us.

Gould said that as a storyteller, he wanted to showcase not only the science, but also create empathy by talking about the people who do it. He was full of admiration for the collaborative culture that he encountered at HEMI, which he said goes beyond research, science and engineering. “It appears to be something they build at the institute. It’s deep in their DNA.”

Kimberly Hall, faculty in the College’s Illustration Practice M.F.A. program, became the 2017 HMEAP Artist-in-Residence. A noted illustrator who runs a print and pattern studio in Philadelphia, Hall’s professional experience includes drawing for Coach, Hussein Chalayan, and Anthropologie — a background far different from those of the scientists she would work with. 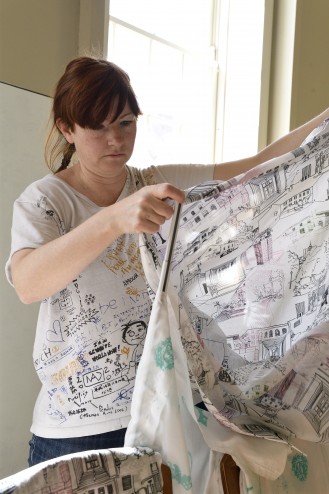 “There was a wonderful broad mindedness in our interaction. I was able to ask ‘stupid’ questions and talk about things that were outside of the actual work the HEMI team was doing,” she said. “There was a lot of valuable knowledge exchange and sharing of ways of thinking without the pressure to make something.”

Hall saw similarities between the artistic process of chance and mistake in Graham-Brady’s work, which employs the same approach to research randomness in the behavior of non-homogeneous materials, such as concrete and ceramics. She also discovered commonalities in the form of curiosity and questioning.

Through conversations with the HEMI team, Hall was impressed with the ways scientists described their process and felt deeply connected to the struggle of the human condition, and to making sense of the world.  Honing in on the language that HEMI scientists used, she created scratch-off wallpaper and transparent fabrics that aimed to illustrate the practice of research and highlight the connection between discovery and meaning.

Installed at the Milton S. Eisenhower Library, Hall’s artwork also engaged the wider JHU community, which added to the layering of ‘conversations’ in the wallpaper by scratching words into them. The show’s rather philosophical title, “The curse of dimensionality,” came from one of the many HEMI meetings that Hall sat in on.

Frye, chair of the First-Year Experience at MICA and the current artist-in-residence for the collaborative program, has been involved in the HMEAP from its inception. She was the sponsor for a MICA intern at HEMI and also one of the MICA faculty members teaching a series of Extreme Arts workshops — taken from MICA’s first-year curriculum — to JHU undergraduate students. 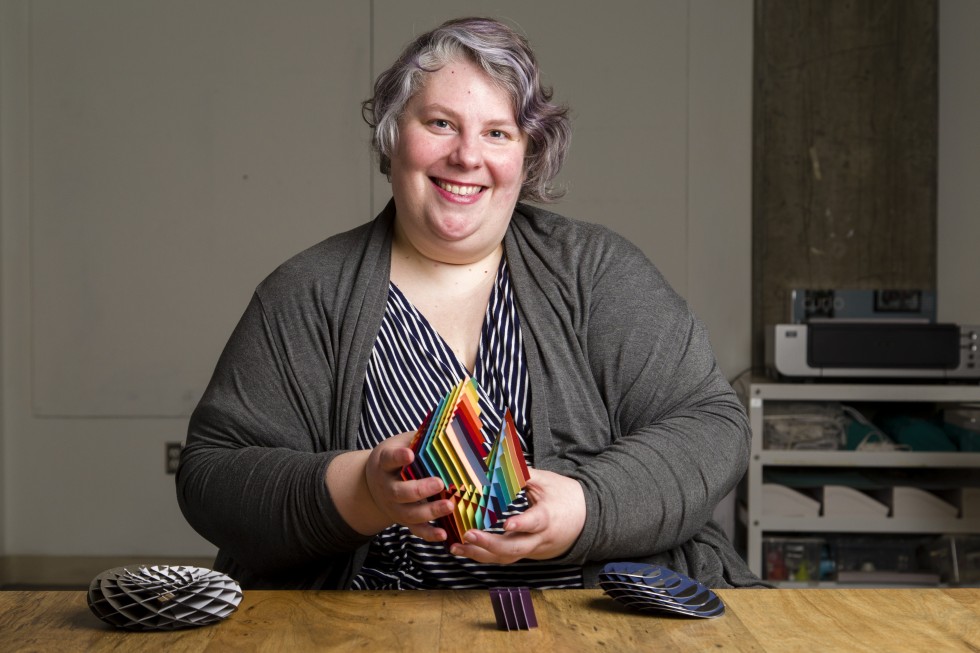 She underscored the importance of having artists and designers on scientific teams from the beginning, to help ask important questions concurrently with research. Artists, she said, “can help scientists with an embodied sense of understanding content. It’s what happens when you put your hands on something and then intuitively think about how to respond to it.”

She explained that it is the kind of knowledge that starts with instinct— something internal to all of us —and is extremely important to understanding materials, as well as what we see and think we see.

“It seems like engineers are trained to not rely on their instincts and look objectively at data. That is a totally valid approach, but you get a 360-degree view if you could look both outside in and inside out,” she stressed.

Currently in the observation/research phase of her residency, Frye has been spending about two days per week with HEMI teams studying structures, having deep conversations about democratizing access to science, and more. Her goal is to make playful objects, educational toys or interactive exhibits that speak to HEMI’s high-level research, helping to communicate it to a general audience through physical material.

Graham-Brady said the HMEAP has yielded significant outcomes for HEMI in many ways. A tangible example is the visual ‘map’ of its collaboration with JHU and other institutions — developed by one of the program’s first MICA interns, Samantha French — that won praise from senior executives at U.S. Army Research Laboratory, sponsors of the Center for Materials in Extreme Dynamic Environments, one of HEMI’s largest research centers.

The program has also brought diverse groups of people together, something that had not happened before at the institute. As she explained, “Beyond the natural synergies between art and science, the program has helped our researchers, engineers and scientists consider problems from perspectives very different from theirs. Beyond improved communication skills, working with MICA artists has brought about intellectual shifts that are so good for HEMI’s culture.”