Numerous MICA students have taken part in the HEMI/MICA Extreme Arts Summer Project/Internship, which aims to explore visual representations of HEMI’s organization, structure, current research, and relationships. HEMI does not dictate what visual representation should look like, and past interns have created a varied body of work. They have made visuals that reflect institutional collaboration and knowledge growth, developed educational animations to explain HEMI research to a non-scientific public, used asteroid data to simulate the differences between impact and thermal fragmentation and studied a foldable honeycomb paper structure with the goal of creating lightweight and strong foldable accordion structures.

The 2018 MICA interns for the program were Shangtong Li ’19 (Interdisciplinary Sculpture B.F.A.) and Amy Wetsch ’19 (Mount Royal School of Art M.F.A.). Li worked with Professor Sung Hoon Kang a HEMI Fellow and assistant professor in JHU’s Department of Mechanical Engineering to learn about and create sustainable materials, while Wetsch worked with Professor Sarah Hörst in the Department of Earth and Planetary Sciences to create mixed media installations that showcase the atmosphere of Saturn’s largest moon, Titan. 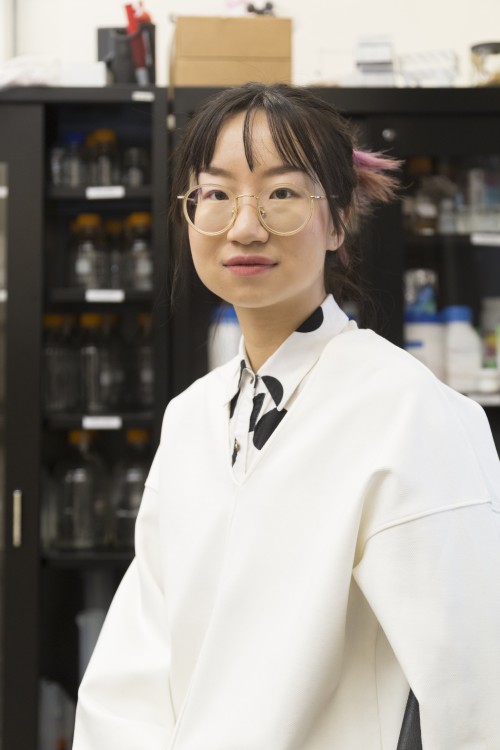 In addition to her interdisciplinary sculpture major, Li is also pursuing a concentration in sustainability and social practice. She has always been conscious about our collective impact on the environment and has been exploring waste as a resource to make art materials. To mitigate the amount of waste she — and art students in general — generates, Li strives to use biodegradable materials, even trying out recipes from online sources. But, the results of her experimentation were not stable, and she needed something that could be replicated.

“The HEMI summer internship dovetailed perfectly with my interest in making sustainable materials. Through it, I learned how to record data methodically and develop materials in a scientific, systematic way,” she said. “This meant that I can now control what I make, and importantly, reproduce materials successfully.” Li now makes all her working material out of waste and plans to share her recipes online through an open source platform. In her quest to create lower impact alternatives to traditional art-making materials such as resin, polystyrene, plaster and MDF — which are harmful to the environment — Li has created a bio-degradable composite and begun testing its machinability on several sculptural tools.

Wetsch applied to the HEMI internship with a view to further her interest in the human body’s struggles and triumphs, with a particular focus on autoimmune disorders. But, as often happens as part of the artistic process, her focus changed when she interviewed with Hörst and was taken with the latter’s passion in planetary science, bodies and space. She felt an immediate affinity for Hörst’s research on Titan, which became the focus of her internship.

Working with HEMI scientists included positive surprises for Wetsch. “I didn’t expect artists and scientists to be so similar. Despite some language barriers, we are both really creative beings and problem solvers who are always improvising and innovating, and not afraid of failure,” she said.

Both Li and Wetsch spoke fondly of their time at HEMI, echoing the warm welcome and openness MICA artists-in-residence at HEMI have experienced. Even though their internships have officially ended, HEMI invited them to continue their collaboration.