If you visit Paul Mirel at NASA’s Goddard Space Flight Center in Greenbelt, Maryland, you’ll eventually take note of the similarities between his office and an artist’s studio. Set inside a ‘60s-era building on Goddard’s sprawling campus, Mirel’s office is laden with the tools he uses to create. But instead of traditional fine arts gear — paint, brushes, rags, fiber, clay, ink — Mirel’s workspaces are filled with techy gizmos, everything from a 3D printer and computer to copper-clad tungsten wire and a soldering iron. Instead of paint thinner, he works with liquid nitrogen and liquid helium. Canvases don’t lean against walls; prototypes of wire grid polarizers do.

Mirel agrees with the comparison, noting, “Engineers and artists are really doing the same thing. We’re both trying to create something that hasn’t existed before.”

And what Mirel spends his days creating are pioneering technologies that will help determine how the universe developed the structure we see today.

You see, our universe is made up of vast, empty areas interspersed with what Mirel calls clumpy bits — things like stars and planets that make up solar systems, solar systems that make up galaxies, and galaxies that make up clusters of galaxies. What’s called the Primordial Inflation Theory posits that in the immediate aftermath of the Big Bang — literally in the first trillionth of a trillionth of a trillionth of a second — the universe so rapidly expanded that quantum fluctuations of the atom-sized universe got stuck as the universe expanded to macroscopic size. Those ‘stuck’ fluctuations created the current structure of the cosmos. Quantum fluctuations happen when particles smaller than atoms, or subatomic particles, blink in and out of existence — and those first ‘in’ particles froze to become the universe’s clumps, and the ‘out’ particles created those massive areas of empty space.

To discover the truth or untruth of all of this, Mirel is creating new tools that will sit on the edge of the sky. A systems engineer working for NASA’s PIPER (Primordial Inflation Polarization ExploreR) mission, he and the rest of the team at NASA will send a balloon observatory to the edge of Earth’s atmosphere, where it will look toward space to measure the polarization of the cosmic microwave background, or light left over from the Big Bang. What that ancient light reveals when captured — nine PIPER launches are planned in all — may have profound consequences. Scientists understand how gravity works on a macroscopic scale — why planets orbit their suns and how gravity bends light, for example — but not on smaller, quantum scales. If PIPER helps prove the inflation theory, it will also give physicists data on the link between gravity and quantum mechanics. 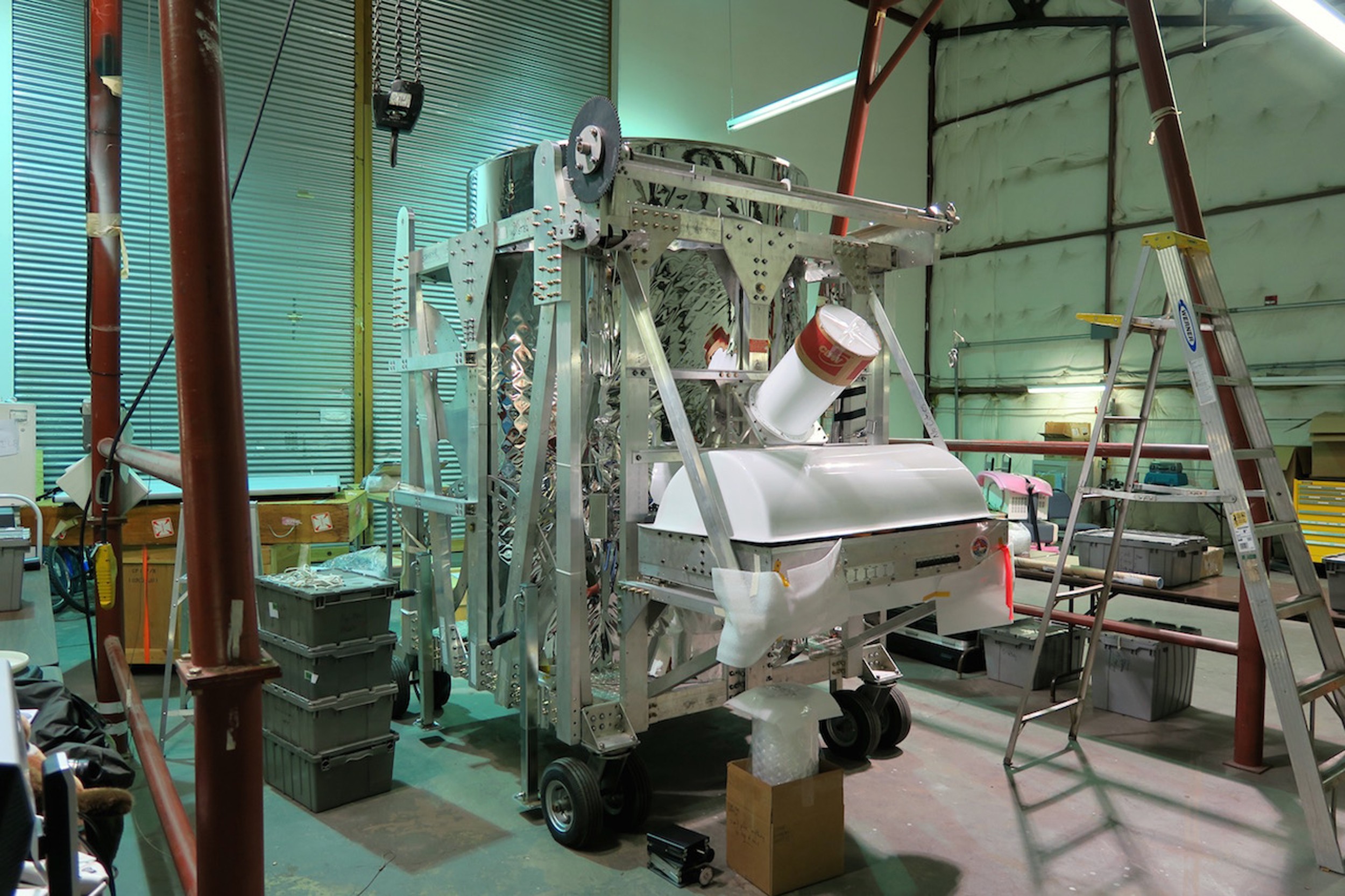 It’s heady, mind-blowing stuff. Mirel explains that it’s all driven by a childlike impulse to constantly question everything. “In order to do science, you have to maintain curiosity,” he said. “Why? Why? Why? Like a child’s approach to the universe. Why is the sky dark at night with stars in it? That’s what we’re trying to figure out.”

Listening to him describe his work is inspiring. You want to go back in time and apologize to your high school chemistry teacher for being bored in class. If you’re an artist, you wonder how your thesis would have been different if you’d had access to Mirel’s enthusiastic sharing of knowledge.

And when you talk to him about his day job and how it relates to his off-hours gig — being the first visiting engineer in MICA’s Division of Graduate Studies — you begin to understand how fitting and utterly delightful the relationship is between engineer and artist, and between Mirel and the students here.

Mirel’s relationship with MICA began because of a light-up princess dress.

“My niece was turning three, and I asked my brother what she was into. He said coloring books and princesses. I asked myself, ‘how can I take this princess idea as far over the top and as strong as possible?’ So I started making a light-up dress,” Mirel said, adding that he’s made a new one for her every year since.

Mirel came to show a prototype of the dress to Cat Yard Dunne ’11 (Fiber BFA), who in turn urged the engineer to meet Annet Couwenberg, chair of the fiber department at the time. Mirel met with Couwenberg, who was teaching the class Unravel the Code with Ryan Hoover ’06 (Mount Royal School of Art). Their mutual interests were apparent, and Mirel volunteered to help the class by conducting workshops on electronics and advising students on engineering approaches and skills. 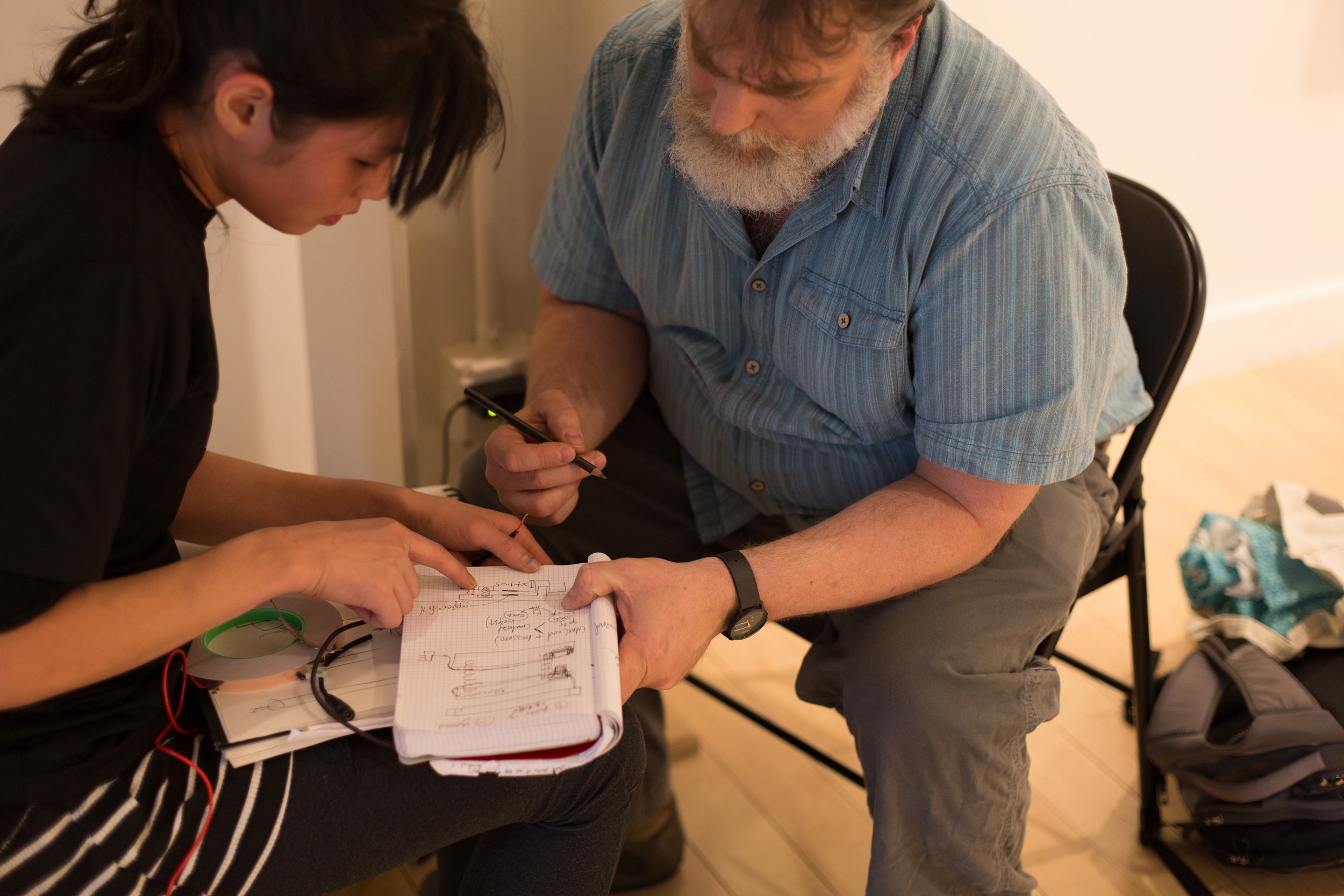 His work there was so successful that the Division of Graduate Studies brought him officially on board as MICA’s first visiting engineer. Today, he visits MICA anywhere from one to four days per week, teaching workshops and assisting with classes such as Motion + Interaction and Toy Design. Because more and more students are incorporating things like Arduino, an open source software and hardware platform, into their work, Mirel also works one-on-one with students on individual projects.

One student who worked with Mirel to incorporate technology into her artistic practice is Morgan Everhart ’16 (LeRoy E. Hoffberger School of Painting). When she received a grant in 2015 to incorporate Arduino into her work, having a visiting engineer on hand was invaluable. As Everhart explained, “If Paul wasn’t at MICA, it would have taken me years to make the work that I aspired to create with this technology. I was able to share my ideas with him, and he walked me through the process of developing each circuit and figuring out what materials I needed.”

While at MICA, Everhart used knowledge gained from Mirel to create a moving painting that changes speed based on the proximity of the viewer. Post-graduation, she plans to work on a capacitive painting that will make sound when the viewer touches the surface. “I feel confident and excited moving further with these projects because of him,” she said.

“Having a NASA scientist advising students is the kind of thing that makes MICA so exceptional. His background is not in the arts, but he is an unmistakably creative thinker and maker with a great deal to offer to all of us,” said Jason Gottlieb ’13 (Graphic Design MFA), the faculty member leading Motion + Interaction. “It’s no surprise that a resident expert like Paul has become such an invaluable resource.”

What Mirel is doing at MICA is pretty basic given his range of skills. At Goddard, he works across multiple engineering fields — from aerodynamic to cryogenic, electrical to optical — and when he describes his work with PIPER, you wonder how he has the spare time to make what can be a two-hour commute from Greenbelt to Baltimore.

But Mirel is a fierce advocate of what he calls the democratization of engineering, the idea that society will be better off if more people understand basic engineering skills. This belief is driven by his thoughts on the environment and the inevitable impact of global climate change.

“We have problems today, political problems and engineering problems. I can’t solve political problems. But the sea level is going to rise as much as a meter in the next decade, and that’s an engineering problem, and as a society, we don’t understand engineering. We carry around cell phones, but we don’t understand how they work,” he said. “None of this stuff is magic, but we treat it like it’s magic. If more people understand how things work, they can make intelligent decisions about the things they make and how they affect this world we live in.”

Instilling basic engineering skills into non- engineers is one reason why Mirel is at MICA. Another is that he simply likes working with artists and designers.

“One thing about artists, they get it done. They are willing to make decisions when they don’t have all the information, and in all cases, you will never have all the information you want. Some of the students I’ve worked with here are some of the most fluid thinkers I’ve ever met. To interact with people like that, that’s why I come here,” he said. He added, “I like exploring new ideas. At NASA, I have one new idea to work with; we think we can measure a signal that nobody has ever measured before, and to do that, we have to be very careful. Here, I teach students a range of skills in engineering, and they all go out in all different directions.”

One of those different directions came from alumna Megan Mills ’15 (Design Leadership MBA/MA), a student in Unravel the Code, who approached Mirel with these simple words: I want to redesign the tampon. Mills explained that the plastic tampon applicator is a huge source of pollution, and they did a back-of-envelope calculation. In the U.S. alone, tampon applicators comprise 10,000 tons of single-use plastic waste every year.

“Megan wanted to make the applicator out of a bio-plastic, but she didn’t know about casting and mold making,” Mirel said. “I taught her how to build some prototype molds, and after we worked together, she came away with the vocabulary to talk to anyone in the industry. She’s not a professional mold maker, but now she can talk to a mold maker with knowledge.”

Since he’s been here at MICA, Mirel has helped not only students, but faculty and alumni as well — with chemistry and process control, with electronics, and he even helped Annie Howe ’01 (Fiber BFA) with the math to scale a window installation. The relationships between Mirel and the MICA community have developed naturally. As Everhart explained it, “Art and science cannot exist without one another. Artists, scientists, and engineers are all essentially investigating people, materials, culture, and history.”

“Both science and art are an expression of being human,” Mirel added. “Theo Jansen, a Dutch artist who makes wind-powered mechanical structures, says that the distinctions between art and engineering are only in our minds. It’s true. We all make things with materials.”

Things like reactive paintings that bring a viewer and an artistic work together. Things like eco-friendly tampons that better protect our planet’s stressed biosphere. Or things like Mirel’s groundbreaking tools that will capture light as old as time in a quest to explain why our universe is made up of empty spaces and star- filled galactic clumps.