In the spring of Akea Brionne Brown’s first year at MICA, that the Baltimore Uprising occurred. It was finals week. And it was an event that to this day, impacts her artistic practice.“It honestly sort of shaped the way that I’ve used my role as an artist,” Brown said.

Brown ’18 (Integrative Humanistic Studies & Photography), a Baltimore-based photographer, was named this year’s Janet & Walter Sondheim Artscape Prize winner. Through her work, Brown investigates the implications of historical racial and social structures in relation to the development of contemporary black life and identity within America.

Her practice is what won her the $25,000 fellowship to assist in furthering the career of a visual artist or visual artist collaborators living and working in the Baltimore-Washington metropolitan area. She was chosen at an award ceremony and reception that took place July 13.

This is the fifth year in a row an artist who is a MICA alumnus or alumna won the award, and the tenth time in its 14 years that the winner was a graduate of MICA.

During the Uprising, Brown said she was watching coverage of the events unfolding, and didn’t feel like that coverage was reflective of what was actually happening. That was the first time, she added, that she felt a responsibility to do the extra work and research, to look into her own community and other communities and to look at the injustices that were taking place.

Brown spent the rest of her time at MICA, and after graduation, doing just that.

Her experiences at MICA—especially her thesis advisor, Colette Veasey-Cullors, and a studio lighting course with Jay Gould—helped shape her work along the way. The lighting course in particular, Brown said, shifted the way she captures portraits.

“That was an incredible benefit to the project because it helped me approaching the lighting, orientation, and composition in a completely different way,” Brown added.

Brown, who was chosen from a group of seven finalists, said she was surprised when she was chosen as this year’s winner.

“I was also so impressed and really inspired by the other artists, and a lot of them are a lot further along in their careers and I was the youngest one,” she said, adding that being chosen is a great honor.

Brown said the prize money will allow her to get more equipment to continue the work she’s doing, but, she said, it will also help her facilitate more change in the Baltimore arts community. She wants to give back to the community and bring other artists along with her, she added. 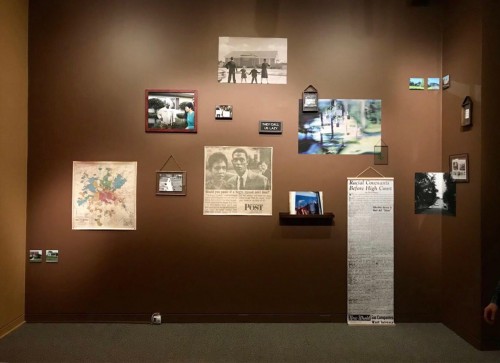 Each finalist not selected for the fellowship is presented with an M&T Bank Finalist Award of $2,500. In addition to Brown, this year’s finalists were Negar Ahkami, Cheeny Celebrado-Royer, Schroeder Cherry, Phylicia Ghee, Jackie Milad, and Stephanie Williams. Four of the remaining six candidates also had MICA ties. They include:

Finalists’ work was on exhibit at the Walters Art Museum through the end of August 2019.