To say that Deyane Moses ’19, ’21 (Photography BFA, Curatorial Practice MFA) entered MICA as an untraditional student is an understatement. Older than most entering freshmen, Moses had a seven-year background in the military, where she was trained in video as a broadcast journalist. She was stationed in Korea for three years—she and a team would go out into the field to document the stories of service members living overseas. Later, Moses would serve as the Pentagon Channel’s bureau chief covering Department of Defense matters, then, as a civilian, move to Los Angeles to work for Voice of America.

At one point during those years, a combat cameraman in her unit got her interested in taking pictures. Moses was immediately hooked, but it wasn’t until the move to Los Angeles that she began to seriously hone those skills. And the more she dove into photography, the more she questioned where she would go with her career.

“Journalism is art,” Moses explained. “But other than just tell stories about what is happening in the world, I wanted to do something to make the world a better place. I wanted to do that with photography.”

She began by moving to Pensacola, Florida, where she obtained an associate’s degree in photography. But as a native of the Washington, DC, suburbs—she lived in Northern Virginia and Prince George’s County, Maryland—attending MICA was her ultimate goal. Moses describes her application to the College as nerve-racking, and once she was accepted, she took nothing for granted. “I was taking seven or eight classes at a time, because I was trying to maximize the opportunities I had while at MICA. My mind set was, ‘I want to take in everything—internships, student activities, everything,’” she said.

So when it was time to begin work on a junior thesis project, she decided to take the advice of Dawoud Bey, a visiting artist. “He told me, ‘Stay local and think about your community.’ At the time, I had just started attending Black Student Union meetings, so I decided to inquire about MICA’s Black History.” That project, which began as something that could easily fit into Moses’ schedule, evolved into something much larger. Called Maryland Institute Black Archives (MIBA), it not only became Moses’ passion—it has begun to effect some of the change she hoped for when she decided to pursue a different path.

INSTALLATION VIEW OF THE BLACKIVES EXHIBITION, 2019

“The project became about black history at MICA—and also the lack of it when I started to look for some,” Moses said. “My goal was to revive that lost history and tell these stories to the community at MICA and even beyond.”

MIBA is a collection that shares the stories of the College’s first black artists, the accomplishments of those who were denied entrance, and the portraits of MICA’s current black community. Its physical archive includes documentary images, ephemera, and facsimile artifacts drawn from databases and special collections. In addition, it includes environmental portraiture and collects oral histories to revive the voices of the past.

Much of MIBA’s collection covers the years between 1891, when MICA admitted its first black student, Harry T. Pratt, and 1958, when Blanche Duggar, the first black woman to attend the College, graduated. In the long period between Pratt’s graduation in 1895 and Duggar’s entry in 1954—almost 60 years—MICA refused to admit to students of color.

Moses traced the history of many of those potential students who were denied admission based on the color of their skin, and it is in recounting their stories that she becomes the most ardent.

“Ellsworth Parker wasn’t allowed to attend MICA, but he was allowed to be a model. He was the only black model, and they used his image to advance their artwork and careers,” she said. “And then there’s Leon Norris. I found his house and photographed it—he applied to MICA, and like me, he was a veteran. He wanted to use the GI Bill to attend school here.”

She continued, “Mabel Brooks was a painter who attempted to come to MICA in the 1930s but couldn’t get in, and she eventually wrote an article in the Afro-American Newspaper about how, despite Jim Crow, she went to study in Italy. She came back to the states and started teaching at Clark Atlantic University. She passed away in St. Louis, so I hope to go one day and visit her grave and maybe find some of her relatives in the area and talk to them about her art.” 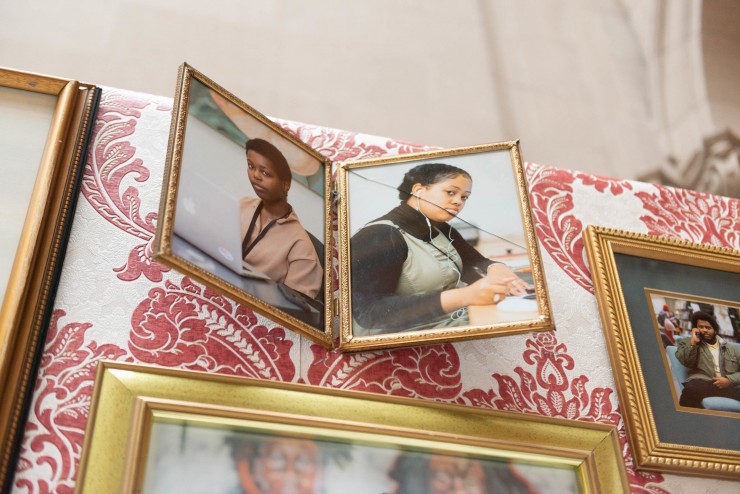 DETAIL OF THE BLACKIVES EXHIBITION, 2019

Moses continued her research into her senior year—spending hours a day after classes delving into archives—and said it is still ongoing today.

“The staff at Decker Library helped me get started, not just here in our archives, but with ideas of where to look, like the Enoch Pratt Library downtown and the Library of Congress,” she noted. “I spent months at Enoch Pratt on the weekends. But MICA provided me with five names when I started, and now I have between 15 and 20. I’m finding new students every day.”

In addition to documenting the past, Moses began taking photographs and collecting the oral histories of black students currently at the College, as well as faculty and staff.

Eventually, she applied for a solo exhibition in student gallery space, and specifically asked for time during Black History Month in February.

That exhibition, Blackives: A Celebration of Black History at MICA— the name is a take on black lives and archives—and a remembrance demonstration, Take Back The Steps, began to shed light on MICA’s past for the wider community.

It also prompted MICA President Samuel Hoi to issue a letter apologizing for the College’s racist past. 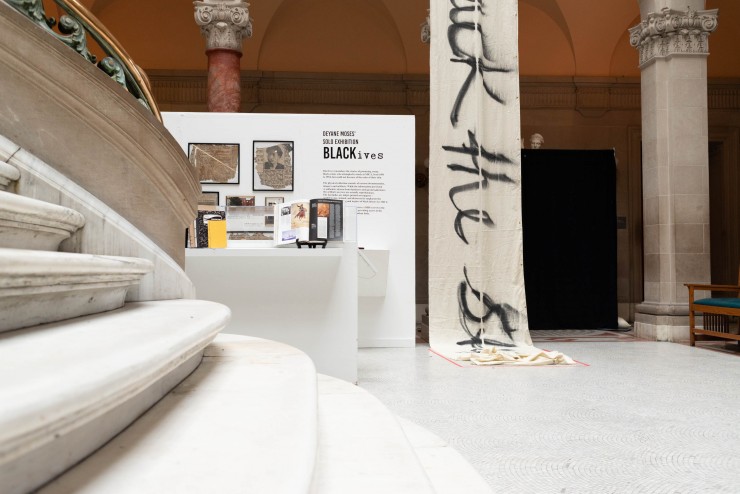 INSTALLATION VIEW OF THE BLACKIVES EXHIBITION, 2019

Moses said reaction to the exhibit has been tremendous. “People who aren’t of color have said the exhibition is great, that they were touched, and they were telling their friends to come. I think it has started to make a difference.”

“Because of my age, I’m coming from a different place than a lot of students here. But the young black students here have such great ideas,” she stressed. “It doesn’t matter what age you are, what matters is your heart and your intention. As long as we support each other, we can make change together. I couldn’t have done any of this by myself. I needed support—to take photos, for people to send me their oral histories, for people to come to the opening of Blackives, for them to tell their friends about it.”

Upon her graduation in May, Moses began an internship at the Aperture Foundation in New York, and will return to MICA this fall to pursue and an MFA in Curatorial Practice. Her goal is to eventually work in a library or museum, and she said she will continue to pursue her research into black history at MICA.