For Jann Rosen-Queralt, director of MICA’s Rinehart School of Sculpture, environmental and industrial elements are an intricate part of her process.

Often centered around ecology, her work transforms urban spaces in a definitive way. Placing her distinct mark on the pieces she leaves behind for public use, Rosen-Queralt’s driving force and the way in which she selects a project, have contributed to her long lasting career in the arts. 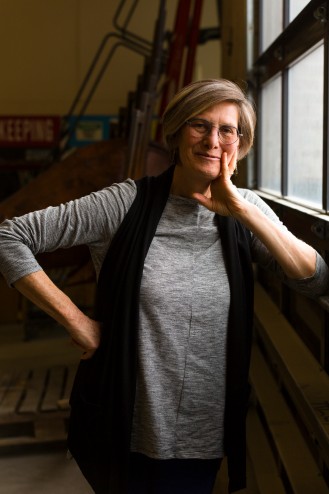 “We live on a planet where there are a multitude of resources, but there is only one ocean. My work advocates for public awareness for our earth’s water,” she said. “The supply is limited and access changes as it cycles through its states of solid, liquid and gas. Nature drives and shapes humans just as humans control and effect nature. My artwork promotes, fosters and encourages awareness so that all people have access to clean water which supports the inhabitants of the marine ecosystem.”

Commissioned to work on a project bordering one of Pittsburgh’s most historic African-American neighborhoods — the Hill District — Rosen-Queralt sowed seeds and cultivated relationships as she created artwork in collaboration with people from the area.

Pittsburgh, or the City of Bridges, served as one of the most important stops for those escaping slavery through the Underground Railroad. Many who “traveled along and in creeks, streams and rivers during the night” using the “drinking gourd” or North Star as a navigation tool in their escape to freedom, stayed and began a new life in the north, settling in and around the Pittsburgh area.

It was the legacy of that journey, the symbolism of water and her compassion for the environment that drove Rosen-Queralt’s vision for the project. She set a narrative and chose to tell a story that would highlight the history surrounding the Hill neighborhood, its park and its community of residents.

“As a member of the Community Arts Partnerships team, I have created an intricate artwork that captures rainwater and weaves it through the site which terraces in a storm water garden celebrating the importance of water, interpreting the geology of Pittsburgh and the spirit of the Hill District community members’ daily lives. These elements are simultaneously visible and invisible, which is why it is important that park visitors be aware of the role they play in a sustainable environment,” she explained. “The rain water is visible as it flows in a trench gutter through the park. In some areas the trench is covered by a grate design inspired by the braids of Mami Wata, the African Goddess of Water. In others, the water flows submerged below the ground plane out of sight and people’s consciousness.”

The work includes terraced walls, which Rosen-Queralt describes as “gabions fabricated with recycled materials such as glass cutlet and indigenous rock, referencing a cut section of the landscape.” Those serve a double function as wall and seats. The artist also created panels to be secured on the terraces in the garden that depict elements inspired by fossil impressions made millions of years ago when Pittsburgh was under water as well as networks such as train tracks and root systems and maps exploring Pittsburgh’s coal steam, hydrology and settlement trends.

Rosen-Queralt noted, “These are enhanced with text extracted from poems, which address abolitionist activity of the Underground Railroad, the settlements during the Great Migration to Pittsburgh and African-Americans who worked the rivers and coal mines of Pittsburgh.”

Much of Rosen-Queralt’s work is collaborative and she notes that working with other people and exchanging ideas is vital to her creative process. “The best collaboration involves cooperative relationships between people working toward similar objectives with mutual aspirations. This does not require that everyone have the same opinion, but does necessitate high respect for the expertise and points of view of everyone engaged in a process.”

With plans to combine her passion for water and under-water photography, Rosen-Queralt is set to join the UNESCO World Biosphere Reserve in the Maldives on a diving expedition, lending her skills as she joins a team researching the manta ray population. Focused on her next public project, she has her eyes set on a park in Missouri where she is “creating two large scale permanent sculptures which amplify surrounding sounds in the landscape.”

“I select projects that will further my understanding of the world and allow me to share my observations and reactions with others,” she said. “This understanding includes art, culture, the biological, physical and social sciences as well as technology — each integral to sustainable ecosystems.”