One of the most striking things about visiting the Fred Lazarus IV Studio Center for Graduate Studies is how vibrant the spaces are. There’s an energy found in the Center’s studios, classrooms, and lounges — and on the streets outside, in the surrounding Station North Arts and Entertainment District.

Walking through this neighborhood, past the Lazarus Center’s street-facing Riggs gallery, you hear a buoyant hum coming from the adjoining, pocket-sized café, Nancy. You see a steady stream of people crossing back and forth across North Avenue to visit Red Emma’s Bookstore and Coffeehouse, or run into Baltimore Bicycle Works, or stop for lunch at one of the area’s eclectic mix of restaurants. There’s the JHU-MICA Film Centre, a jewelry center, art house movie theater, an array of music venues, and fixed and pop-up galleries, and on every corner there’s a pulsating sense that things are happening here.

And though the Station North area has transformed tremendously over the past decade, that change has not meant beautification and gentrification as commonly seen elsewhere. The neighborhood is not home to big box chain stores nor has it seen architectural gems turned into high-priced condominiums. It is real and sometimes gritty, hopeful and confident, and most of all, it is a community where MICA’s graduate students play a vital role.

Among those are the dedicated members of MICA’s Grad Ex committee, a graduate student-run organization whose growth has mirrored that of the neighborhood it calls home. The committee was established formally in 2012, when a growing number of MICA’s graduate programs moved into the newly renovated Lazarus Center.

As Patrick Galluzzo ’14 (Photography and Electronic Media MFA), one of the organization’s first leaders, explained, “Grad Ex was founded when the Lazarus Center reopened. The committee evolved from a previous group of students who held exhibitions in the old Studio Center, as the building was known before. With the renovation came new exhibition spaces and a more formal approach to securing graduate exhibitions around the MICA campus.”

Since then, participation in Grad Ex has grown and the organization has evolved. Today, it is not focused solely on traditional exhibitions but also on providing platforms for the larger community to engage through the appreciation of art and sharing of ideas. Grad Ex exhibitions have also spread beyond MICA’s campus into venues and spaces throughout Station North. 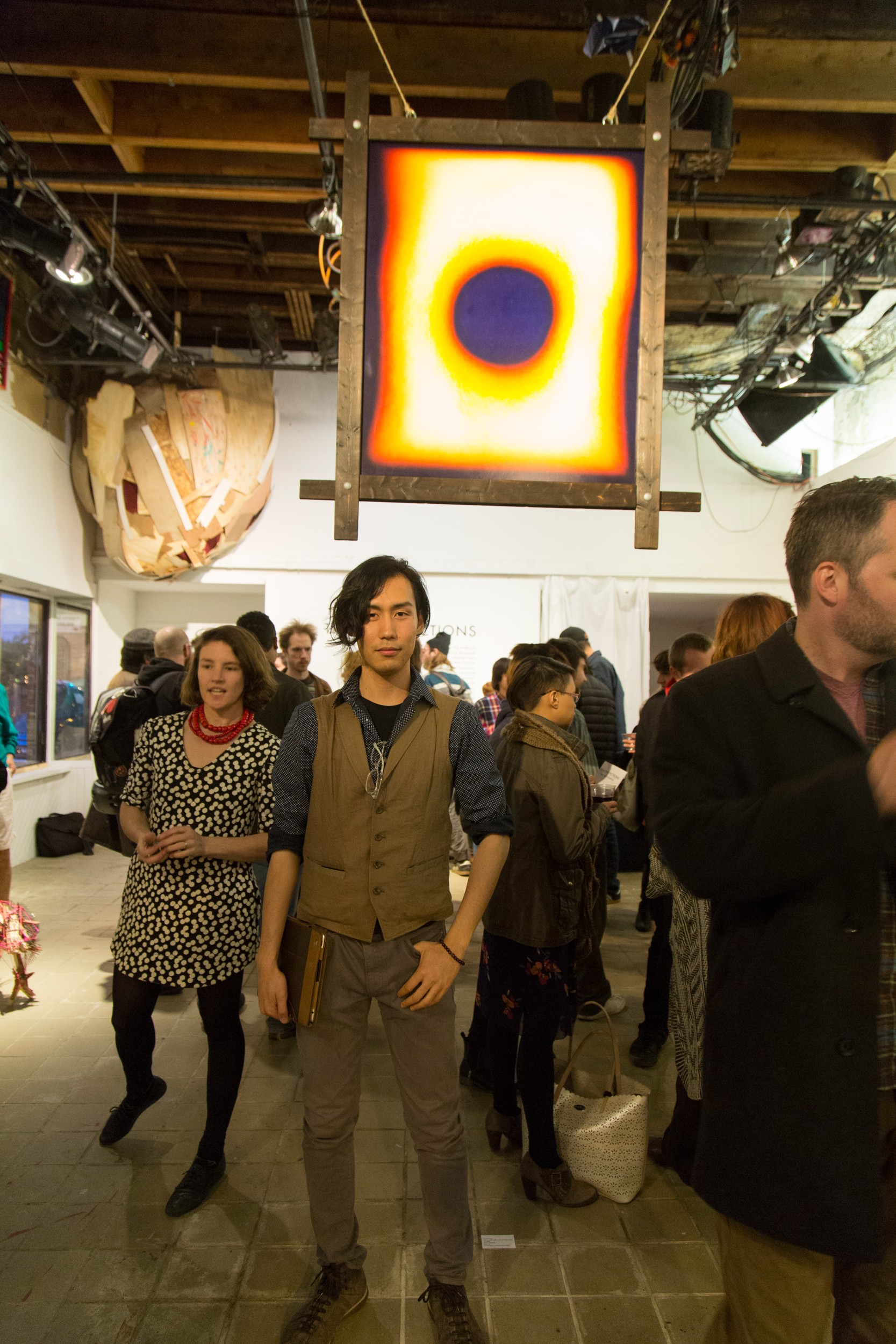 “Other students get excited about what we’re doing — solo shows, group shows, artist talks open to the community — we have a group following,” Braxton said. “Grad Ex is very much run in a co-op manner. Everyone involved has authority for how the group works and decisions are made by majority vote.

“The great strength of Grad Ex is that students get the experience of putting together an exhibition,” Keiper added. “They are allowed to make mistakes and to learn from those mistakes, without the supervision of a director and pressure of formal critique — but with the pressure of a public who will see the work they put together.”

Keiper, who had a solo exhibition curated through Grad Ex in fall 2015, knows firsthand how this kind of experience can impact the way an artist works. He created a political piece for the show, a choice that came with challenges not experienced in his program of study.

Keiper, who lives in an East Baltimore neighborhood where he has observed systematic racism less apparent in other parts of the city, got involved with protests surrounding Gray’s death early on. And as he began putting together his show, called Rough Ride, he wanted to convey the intensity of the intensity of events to people who were not closely involved.

Noting that those events had a “major sonic element,” the artist put together a work using the sounds of a rough ride — a vehicle’s engine turning, wheels rolling along pavement, and loud, violent strikes against a hard surface — folded over the noise of the unrest, including the sound of protestor chants, the incessant whir of overhead helicopters, and the voices of politicians and media commentators as they opined about events unfolding in Baltimore.

“I knew Rough Ride would be provocative, so I had to think about how I staged it,” he said. Reaction was intense, but Keiper emphasized that the experience was invaluable. “It confronted the public nature of artmaking in a way that is very different from the nature of critique with faculty and peers. Everybody knows your work, they know your motives, and hopefully they like you,” he explained. “The public doesn’t bring that knowledge to your show, and that changed the way that I work. That is one of the major benefits Grad Ex offers.”

In addition to bringing challenging ideas to the community, the committee has extended exhibitions beyond MICA’s galleries into venues dotting the surrounding Station North neighborhood.

Braxton noted, “That was one of the most exciting things I’ve been involved with in Grad Ex. We worked tirelessly on Tracing Fictions, and applied for a graduate pop-up fund. We got that funding and also found sponsorship and support within the community beyond MICA-by local businesses Union Brewery and Park Avenue Café. It ended up being very successful, and it was the biggest exhibition Grad Ex ever put together.”

Currently, Braxton and Keiper are working with a mix of first-year graduate students on the transition of the committee as they and the other second-year students in Grad Ex prepare to graduate.

“I came here and saw that I could help with these exhibition opportunities, and it was great to find myself working with a group of like-minded people. And now we’re building something for students yet to come,” Keiper said. “Grad Ex brought me into intimate contact with students from other programs and inspired a lot of inter-program discourse and energy.”

Braxton added, “Having everyone in the same building — this graduate community in the Lazarus Center — we have more interactions than we would have elsewhere. We’ve built a very strong community, and we’ve added, I think, to the neighborhood. Being able to build a network beyond your program is critical for discourse in art. It has definitely strengthened my studies have and work.”