Cindy Cheng ’08 ’11 (Fine Arts Post-Baccalaureate, Mount Royal School of Art M.F.A.) measures success by what happens in the studio – not in galleries or museums and definitely not by recognition of her work. And when she’s in her studio, more often than not, she is failing.

That edge is pretty spectacular.

In 2017, her work – complex installations that investigate the relationship between drawings and three-dimensional objects – earned the prestigious Janet and Walter Sondheim Artscape Prize, a $25,000 award given annually to visual artists in the Greater Baltimore region. 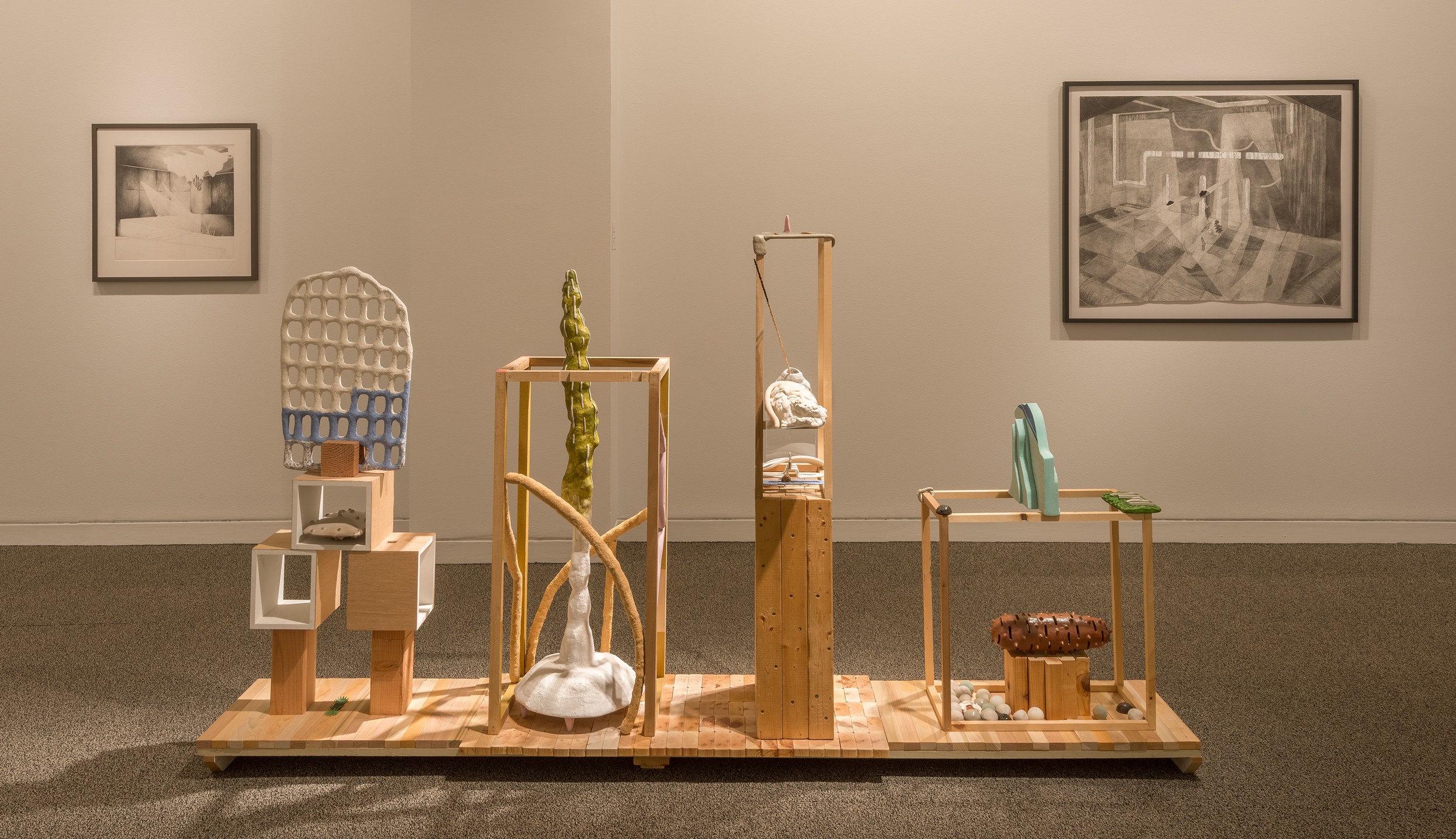 Despite the honor, Cheng remains focused on her studio – a sizeable, open space in Baltimore’s Greektown that she shares with fellow Mount Royal alumnus, Jon Latiano ’12. It is there that she takes award-winning risks, an approach to artmaking she credits to her time at MICA.

“This whole idea of experimentation was a huge part of the philosophy of the Post-Bacc program and Mount Royal. Challenging what you do so that you actually are going into the unknown – for you – can create a lot more of an interesting experience both for yourself and for whoever is engaging with you,” she said.

Originally an English major at Mount Holyoke College in Massachusetts, Cheng switched her focus to painting during her sophomore year. She eventually shifted to drawing, and when she came to MICA for the Post-Baccalaureate in Fine Arts program, she continued her two-dimensional work.

Exposure to visiting artists who had a similar ethos to Cheng but worked in different disciplines nudged her to experiment with more diverse media. She began working more with collage and cut paper. Faculty in both the Post-Bacc program and Mount Royal School of Art urged her to take more risks.

“So I did,” Cheng said. “It took a long time. It was really hard. There were a lot of tears and a lot of really hard critiques, but I had a breakthrough in Mount Royal when I was trying to prep for my thesis. Alice Aycock came into my studio and she thought my worktable was really interesting. All she wanted to talk about was my worktable and none of my drawings. So I looked at my worktable and asked, ‘Why can’t this be art?” I started doing dimensional drawings that sort of came off the wall, and that was the start of everything else. That was how the faculty really pushed me along.”

A native of Hong Kong, Cheng has lived all over the world – including Vancouver, Hawaii, Massachusetts, and now Baltimore. These places are an important part of Cheng’s artmaking. She noted, “I take a lot of references from the spaces I’ve inhabited. I use structures and forms in my work that reference what I’ve seen in Hong Kong. Same thing with Baltimore, same thing with Hawaii. I think the way you inhabit a space and what you take from that forms how you move through the world. That’s an element that is pretty fundamental in my practice.”

The most important aspect, however, remains the risks she takes in her studio.

“I’m working on pieces for a show in Portland [Or.], and I’m kind of just feeling it out,” she explained. “I just say, ‘I think this will work. I think this material is ok.’ Half the time – more than half the time – it fails. I’ll take that failure, something that happened functionally or aesthetically, and that will be the beginning point of another work that is totally and entirely germinated from that failure. That’s a really integral part of my practice, and because it happens so much, I’ve learned to make it really productive. That’s how you build your expertise.”