What do exhibitions look like when they take queerness for granted? This was the question I tried to answer for most of the year and a half I spent developing my Curatorial Practice MFA thesis project, Become Again. Working with four artists using disparate mediums and approaches, I imagined walking into a gallery and instinctively knowing that I had entered a queer space without having to be told.

What if queerness formed the foundation of an exhibition, allowing it to explore a multiplicity of themes?  I dreamt of a show of queer artists organized by a queer curator championing our experiences rather than shouldering the burden of justifying their validity.  I wanted to feel recognized in an exhibition and create the opportunity for others to feel the same.

When I began this project, my understanding of queer art was narrow.

I knew the work of photographer Robert Mapplethorpe, shocking in its unabashed display of explicit homosexuality.  Mapplethorpe’s work led me to the illustrations of Tom of Finland and other artists making their queer sexual practices visible through art that often ignited controversy.

I also learned about the gut-wrenching works made by artists in response to the AIDS crisis of the late 1980s and early ‘90s. The work of David Wojnarowicz, ACT UP, and the Gran Fury collective slapped me across the face with truth: It responded to a reality I had never known, a life I could have had if I had been born decades earlier.  Queerness existed as a secondary distinction of these works for me; their importance lay in their call to action, exposing realities that were constantly being erased by heteronormative society. 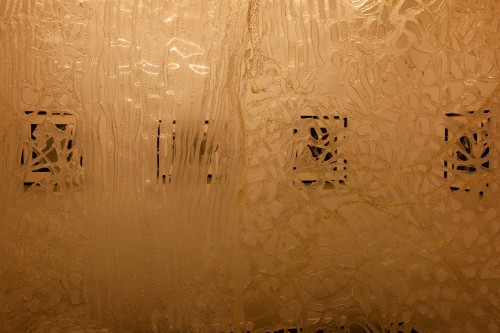 In preparation for my thesis, I researched shows that challenged my ideas of what queer art could be—and how it could be presented. I looked into an exhibition called INTERFACE: Queer Artists Forming Communities through Social Media that was on view at New York’s Leslie-Lohman Museum in 2015. The show had a diverse visual appeal, but its exploration of how artists created community online really drew me in. I followed several of the queer artists on social media, which often led to finding new ones. The way they promoted one another captivated me; I wanted to create this kind of network through my own curatorial practice.

A line in curator Walt Cessna’s statement for the show summed up much of my thinking: “Just what constitutes queer art…does not necessarily rely upon sexually provocative imagery; rather, it is an extension of the multi-identities queer artists proclaim for themselves or simply allow their work to occupy.” The specific phrasing of “multi-identities” really matters here; I wanted to communicate the vastly differing paths queer folks follow after coming out. This statement became a primary driving force in the further development of my own project aims.

I came to MICA with the explicit goal of combining my professional growth with my personal life. My previous curatorial endeavors in Salt Lake City involved artists I had known for years with whom I also had close personal relationships. As I planned to uproot my life by moving to Baltimore, I was nervous about building new close friendships full of honesty, which I prefer to have with my creative collaborators. Despite my fears, when I left Utah, I left behind any part of me that was straight. I set out to build a new social circle, and it was going to be gay as fuck. For my thesis work, I set the goal of working with all queer individuals for every part of my project.

Through the network of students at MICA, I met Mandy Chesney in September of 2017; sparks flew.  She wasn’t someone who fit any conventional idea of queerness, but she didn’t have to.

It was in the way she laughed at my jokes and the side-eye that came after a particularly straight comment. I could tell by the way she saw right through my calm veneer into the depths of my gay little heart—she was family.

We discussed our individual practices a handful of times in the process of building a lovely friendship, but months passed before we decided to do a studio visit—during which I fell in love with the way she visualized her ideas. Working in glitter, costume jewelry, and all things shiny, Mandy utilizes kitschy materials in the service of serious content. Her installations are so much about orientation; viewers must move around and through them in order to fully appreciate the beauty at hand. What a perfect metaphor for the work needed to become yourself as a queer person.

Soon after connecting with Mandy, I met a perfectly sassy ball of fire named Jasjyot Singh Hans at a party.  He was delightful to get to know, equally adept at fawning over beautiful men as he was at dissecting the cultural significance of RuPaul’s Drag Race. We bonded over discussions about navigating relationships and the post-closeted experience.

The choice to work with him provided a challenge for me as a budding curator. I was infatuated with the visual sensibilities in his pen and ink illustrations and knew he belonged in my project even though his work didn’t immediately appear to fit with my themes. I knew that collaborating with Jasjyot would provide a chance for me to push his work into new territory, hopefully resulting in growth for both of us. 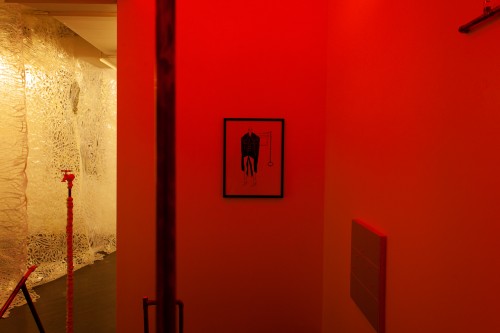 Because of my limited exposure to queer narratives—mostly via mainstream pop culture—I had assumed that coming out was the touchstone experience of being gay.  But as I was now openly discussing my sexuality, I saw that I was transforming more than ever. As I continued building a remarkably queer social circle, I decided to focus my thesis exhibition on the post-closeted experiences of queer individuals.

I reached out to Nick Simko after seeing his work in Baltimore in an exhibition called Miami is Nice. Inspired by The Golden Girls, the iconic television series that influenced the development of countless young queers, the exhibition enveloped works by more than 40 queer artists in a homey environment of kitsch and color. Nick’s photos in the show featured dialogues between organic and synthetic forms; these spoke to the contrast between who we are and who we construct ourselves to become.

When Nick and I met, our conversation had a natural flow, highlighting once again that innate connection stemming from shared experiences. We were a couple of nerdy gays, obsessed with intellectual discourse, trying to fuck with societal norms. We immediately knew that we would work together.

Soon after, I found my way to Lost Earring, an installation by Elliot Doughtie at School 33 Art Center. Elliot’s gallery was subtly unsettling, a dreamy, non-functional bathroom that called to the dysphoric experience of being trans. The work was a multilayered metaphor: The plumbing elements Elliot incorporated into his piece were representative of both biological systems and the contested space of public bathrooms for trans people; small vials appearing throughout the work were filled with testosterone the artist used to medically transition. Elliot’s work left a mark on me; I knew then that he had to be in the show.

At this point I felt ready to reach out to a gallery with a roster of artists who pulled on my gay heartstrings with their personalities while also backing it up with incredible work. Terrault Gallery had put on some fantastic shows that grabbed my attention. I knew from our paths crossing in social circles that gallery director Carlyn Thomas fit well within the ethos of the project, so I proposed the exhibition to her. Carlyn’s enthusiastic acceptance stoked my excitement.

In order to succeed, I knew I needed more than just the right roster or gallery. I was drawn to study at MICA not just by the opportunity to connect with artists but also by the school’s emphasis on using community engagement to build projects that have an impact beyond the art world. I knew that I needed a partner outside of the school to connect me to the city of Baltimore.

Shortly after arriving at MICA, I learned about the Gay Lesbian Bisexual and Transgender Community Center of Baltimore (GLCCB), which has since been renamed The Pride Center of Maryland.

I met with their executive director at the time, who gave me some good advice for framing my concepts and recommended attending Giovanni’s Room, the organization’s monthly open mic night. At the event, I noticed that the poets shared experiences similar to my own process of building queer friendships.

I had initially thought of calling this show Puberty 2 after the 2016 album by singer-songwriter Mitski. Ultimately, though, I found myself thinking about the band Purity Ring’s album Another Eternity. One of my favorite songs on that album includes the lyrics “you be the moon, I’ll be the earth, and when we burst, start over, oh darling, begin again.”  This image of a cataclysmic event that seems like the end but in reality offers an opportunity for something new stuck firmly in my mind.

But I wasn’t interested in a totally new beginning; after all, we each held on to so much of ourselves after we came out. Instead of a beginning, how about a new stage of becoming? I landed on the title Become Again, which felt perfectly malleable, just like our identities—which had already become so strong in order to allow us to be true to them. But now that we were out, we could become again in as many ways as many times as we needed to. 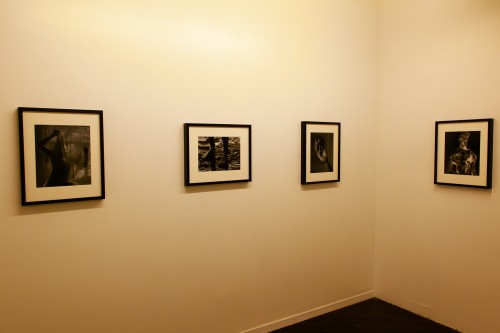 I started to think about how to engage the correct audience for this exhibition. The first time someone asked the question “what will straight audiences get out of your exhibition?” I felt the same knot in my stomach that I used to get any time someone asked my closeted gay ass why I didn’t have a girlfriend.

In the Curatorial Practice program, we talk about primary, secondary, and tertiary audiences; all three of mine are queer people. I’m fed up with conversations about queer identity so often re-centering on how they relate to straight people. Too many projects frame themselves as seeking to validate the queer experience. Too many people come out to their families only to be met with cries of, “Why are you doing this to us?” I want something beautiful made by queer folks for queer folks, period. We aren’t doing anything to anyone by living our truth.

I came to see this process as my curatorial coming out; I jokingly started referring to myself as a “queerator,” but now I seriously consider putting it on my business card. This returns to the question that opened this essay, and the pursuit of exhibitions that take queerness as a precursor for something more. The collective conversations in this exhibition led to new developments in the practices of all four artists; this proved to me that curating can support community growth. Moving forward, I want to pursue a path that situates me as a facilitator for that growth. I spent the last two years becoming a queer curator. Now I can move forward finding ways to continually become again.