Jason Corace, former director of MICA’s Game Lab, knows the potential of game design. It has the ability to entertain, but can also connect people and is a fantastic vehicle for telling stories and investigating complex systems.

Design is increasingly recognized and appreciated in the world, and games, as Corace noted, are becoming a part of that conversation, too. Society has begun to divorce the concept of play from childhood. And with that comes the recognition that games can do more—and that artists and designers are uniquely skilled to use them to bring change.

“We're always looking for different ways that we can use games and virtual reality and interaction design to make meaningful change, and also to test what games can do,” Corace said.

What that means for the MICA Game Lab these days is experimentation with virtual reality (VR) technology and games as a means to improve the lives of those suffering from traumatic spinal injuries resulting in quadriplegia.

This work is being done through a partnership between the MICA Lab and the R Adams Cowley Shock Trauma Center, University of Maryland, which is part of the Maryland Blended Reality Center (MBRC). MBRC is an innovative collaboration between computer scientists at the University of Maryland, College Park, and physicians at the Shock Trauma Center in Baltimore. On MICA’s side, in addition to Corace, are Nastia Garachtchenko ’19 (Animation and Game Design BFA) and Marco Cortes ’20 (Game Design BFA), who interned at the hospital in the summer of 2019.

A partnership years in the making

While the partnership between the Game Lab and Shock Trauma began in 2019, it was a meeting between Corace and Sarah Murthi, MD, a few years earlier that sparked the idea to collaborate.

Murthi, associate professor in the Department of Surgery at the University of Maryland School of Medicine, attended an event at the MICA Game Lab and met Corace. Soon, the two were talking about the future of VR games and medicine, as well as ways they could work together. And while it took a handful of years, a project eventually emerged with a precise concept they could experiment with: Can VR in games be used to help people with serious spinal injuries step down off of ventilators?

A patient with a high spinal cord injury can be in the hospital for weeks to months learning how to breathe without assistance. It’s very hard to learn to breathe again and there are few options to make it easier, something Murthi said troubled her.

As part of the process of weaning themselves from a ventilator, patients go through trachea — or “trach” — collar trials. When an individual has to be on a machine that breathes for them for an extended period of time, doctors perform a tracheostomy, where they put a breathing tube directly into a patient’s neck. The “trach” trial involves bringing patients off of the ventilator for longer and longer periods of time.

The process is intensely anxiety-inducing.

To help with this, doctors give patients medication—typically those used to manage anxiety or pain—but such drugs have high-risk profiles and can actually suppress breathing. But making the process easier and less stressful, Murthi said, allows patients to do better, heal faster, and ultimately get out of the hospital quicker.

VR has the potential to make that process less trying without the use of medication. However, as Murthi explained, “Most of the virtual reality environments that currently exist require you to be able bodied to move around.”

She joined forces with MICA’s Game Lab to explore how VR could be used by those with spinal injuries, and Joshua Basile, a former patient and individual quadriplegia consulted with the design team.

“We thought it would be super cool to create games and environments that you could participate in, even if you couldn't move at all,” Murthi said.

Garachtchenko and Cortes were charged with developing the VR game, and came away with a suite of games developed over three months—a timeframe unheard of in the industry—that used a joystick operated with one’s mouth, known as a quadstick.

But the project wasn’t without challenges. Designing a game with a broad target audience in mind required creativity that designers and artists, in this case, Garachtchenko and Cortes, bring to the table.

“Our target audience is hospital patients. So literally anybody. We were designing a game that appeals to the general audience, not just people who play video games regularly,” Cortes said. “We could be talking about people from ages 20 to 80. How do we make that fun for everybody?”

This realization led Garachtchenko and Cortes to design a collection of games that allows users to select from a handful of different options.

“That way they could test a wide variety of what kinds of games patients enjoy more than others,” Garachtchenko said, adding, “But all of them have the same core premise. How do we get people to spend time thinking about a game instead of thinking about the fact that they're in a hospital?” 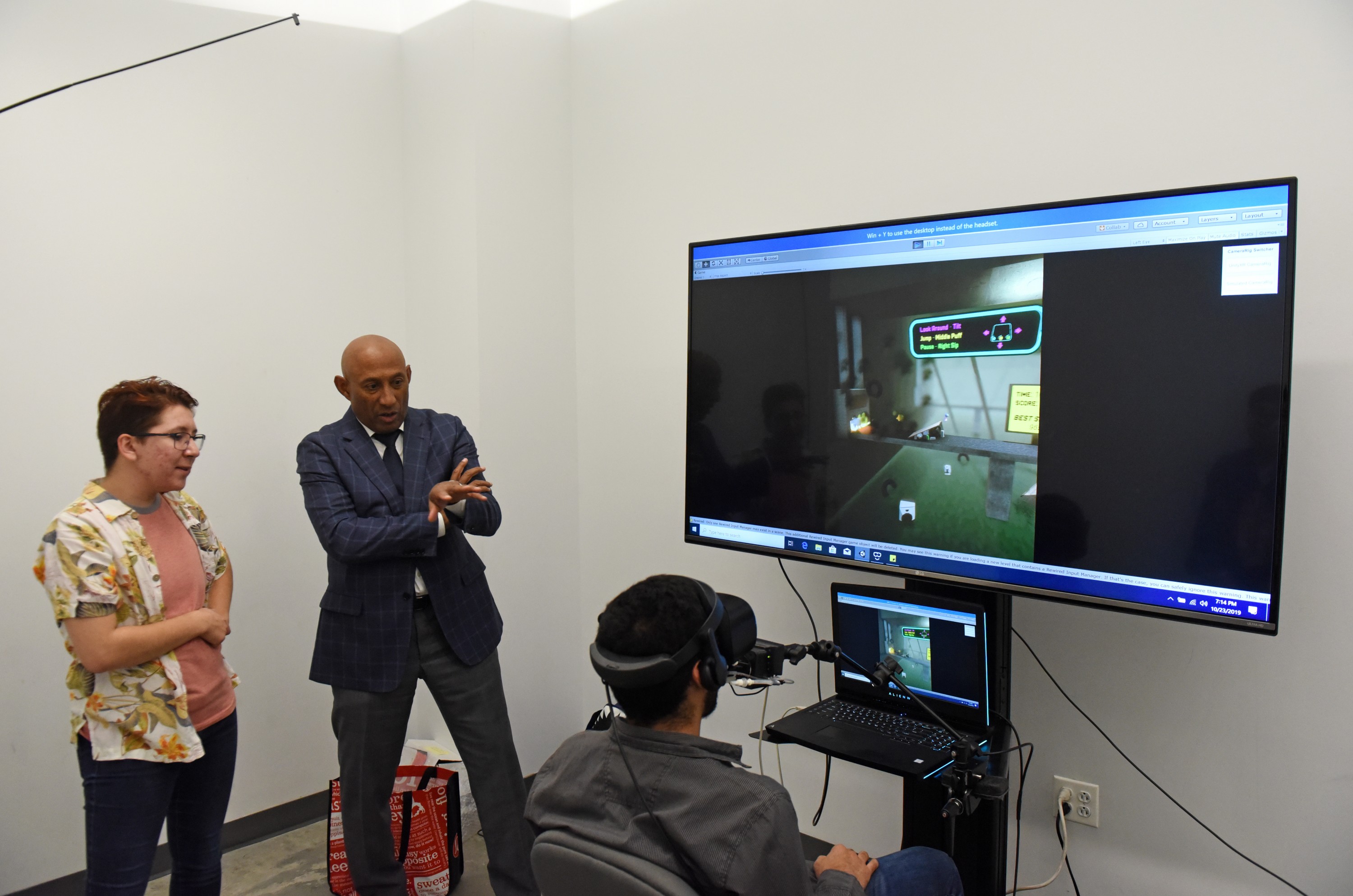 With projects like the Shock Trauma collaboration, students at MICA are realizing just how important their skills are in a world where creativity is increasingly valued across a wide variety of sectors.

Murthi agreed—the students bring an artistic perspective to medicine. It’s the “best of Baltimore,” she added, bringing MICA and Shock Trauma together.

Shock Trauma, Corace noted, was interested in the Game Lab because while the hospital has a computer science program, they don’t focus on the user-centric game side of the field. That’s where MICA comes in.

“We really focus on what it means to play a game together to engage in the same set of interactions, to make connections, to set up a bunch of rules and to understand those rules and those feelings and emotions that they're going to create,” Corace said. “They came to us because they don't have a small quick prototyping kind of lab like we have here.”

Working in a hospital setting takes the students out of their element some—they’re not in a “cozy, creative environment,” Corace said. But, as creative people, part of the job is finding the cracks in organizations and bringing in that different skill set.

“There's a real sense of appreciation and respect for each other's work. And there's a challenge there because you're working with people who don't necessarily come from a creative background.” Corace explained. “Whenever you work as a designer you also have to educate people about your process and what you do. And so to see students step into that role, where they help educate researchers on how they work, that's really empowering for the students.”

MICA Game Lab students were a good fit for this program because they come from extremely diverse backgrounds, Corace said—and because they work incredibly well on teams. Game designers are trained to build projects that rely on an array of skill sets. A typical game design team will have an animator, an illustrator, a programmer, a game designer, and sometimes even a sound artist.

“They're already used to working with people's really different skill sets and putting them together to create some kind of experience. So the idea of changing that out and saying, ‘cool, now you're working with a medical researcher, now you're working with somebody who's doing medical visualizations,’ it's not as intimidating,” Corace said. “This idea that we can take artists and designers give them tech skills, and then unleash their creativity to solve problems — that's really exciting.”

A chance to see what games can do 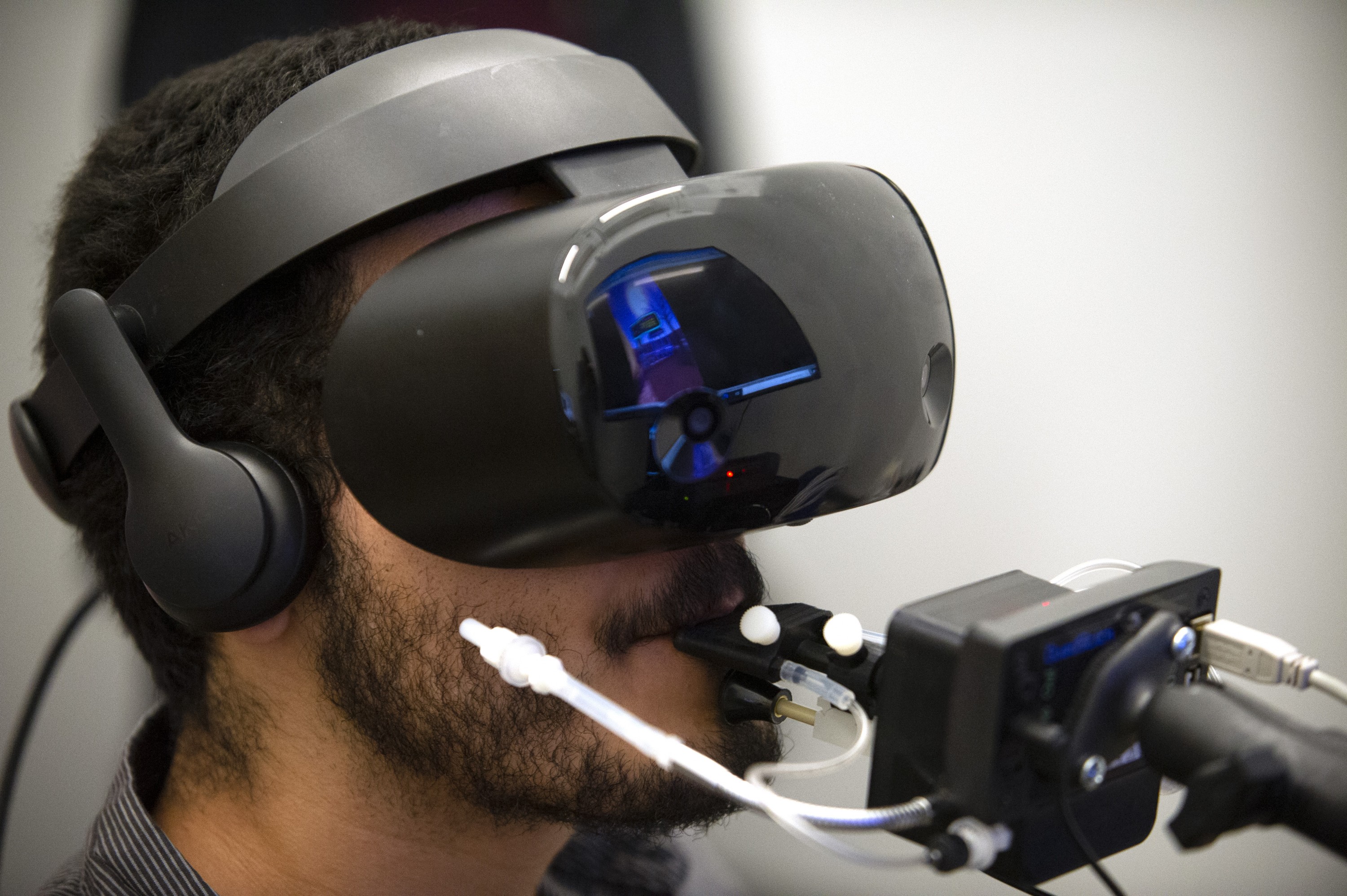 Students stayed on the team this fall, past the summer internship, as the technology heads into testing. Murthi said they’re working to get a minimum viable product—a first generation game—to begin testing on patients.

The team has not come away with any strict answers, Corace said, but noted that unthought of pieces have been learned along the way. For example, learning how to use the quadstick will help patients with spinal injuries once they’re out of the hospital. It’s an added benefit the team hadn’t anticipated that can help the patients live richer lives.

At the core of it, the work being done is experimental research, often shorter-term projects, because the Game Design program is made up of undergraduate students.

“We're not really building products. We work with undergrads and they have much tighter schedules,” Corace said. “So often, we're looking for interesting summer internship opportunities or short semester-long projects where we can create really compelling, interesting work.”

These projects also allow the program—which is just in its third year—to truly work as a lab, and to allow students to explore the possibilities of what games and play can do.

“We're making games for everybody and we want to use the power of play to make the world just a little bit better,” Corace said.